Stardew Valley is a game that feels like home. It all feels familiar to me, like a part of my everyday routine: get up, brush my teeth, and play a day of Stardew Valley. I know the game like the back of my hand. I know everyone’s likes and dislikes, everyone’s daily schedules, everyone’s birthdays. Starting new games feels like coming home after a long trip, when the seasons have changed and the cosy familiarity of your neighbourhood has an exciting touch of the new.

And yet, after many such games, there comes a point where you’ve done almost everything and it starts to feel repetitive. There’s only so many times I can hear NPCs speak the same lines over and over. I wanted to change this.

I discovered the Stardew Valley modding community when I realised how much I disliked the fact that Shane, the town’s resident heartthrob-grump and alcoholic, kept drinking even after he vowed to cut down on alcohol. I’d married him three times in three different playthroughs, as though I expected something to change. When nothing did, I decided to take matters into my own hands.

More specifically, I took matters into the hands of the modders who change Stardew Valley to their liking. I spent hours browsing Nexus Mods, found two mods which fit the bill exactly, and just like that, the game felt new again. Shane stopped drinking and got a new job at the saloon in town. It felt like my farmer had married an entirely different man. 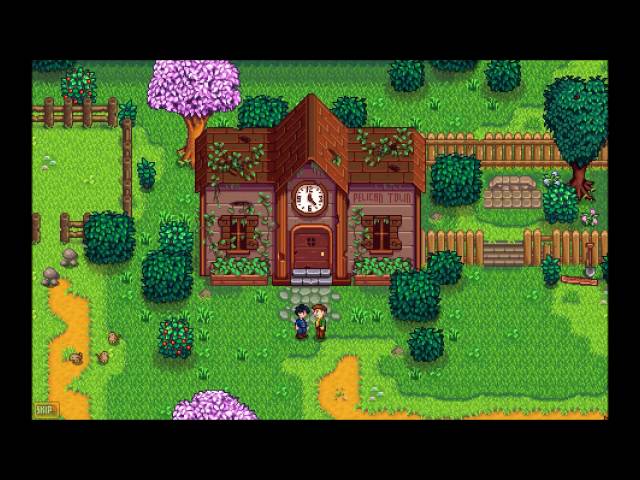 But rather than explore different paths within the game, I’d achieved this by installing a new one. A line had been crossed, and suddenly Stardew Valley seemed less familiar. It felt a bit like I was messing with fate: if ConcernedApe, the creator of Stardew Valley, intended for Shane to start as he meant to go on, then should I really try to change that?

I made these mods for me. It's my town, I'll do what I want

“A lot of people feel that way,” a modder, who asked to be identified only as Karina, tells me. “But modding isn’t like that. I’m not ‘fixing’ the game. I’m just tweaking it a little. You don’t want Shane to drink, I don’t want my trees to be green.”

Karina is the creator of a popular mod that completely overhauls the graphics of Stardew Valley, giving the town a more exotic colour scheme. She’s also made several other mods, but says she’d rather not share them with the public. 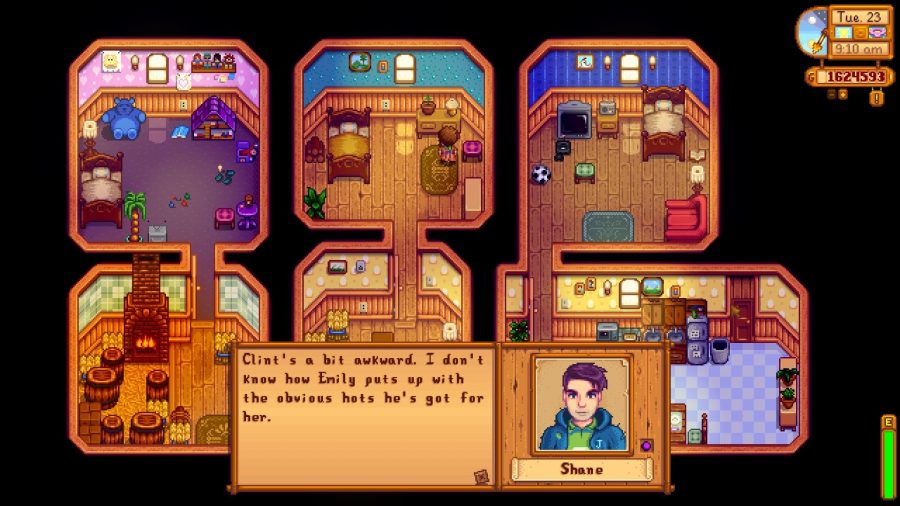 “I made these for me,” she says. “I wanted to change my game so that I liked it. So I changed Haley’s dialogue to make her less airheaded, I changed Harvey’s sprites so he’s not so geeky-looking – you know, he’s more of a hot doctor. I made Marnie a romanceable character. It feels more personal now. They’re just things that I wanted. It’s my town, I’ll do what I want.”

Karina doesn’t think there’s anything wrong with the base, or ‘vanilla’, Stardew Valley; she started modding “because I like the challenge! I wanted to see what I could do.” But from there, it became more about making the game her own, so that it felt more like a universe that catered to her.

“[ConcernedApe] made a beautiful – an awesome – foundation for people to build upon. The only flaw vanilla Stardew Valley has is when you sometimes glitch out and get stuck in the walls.” 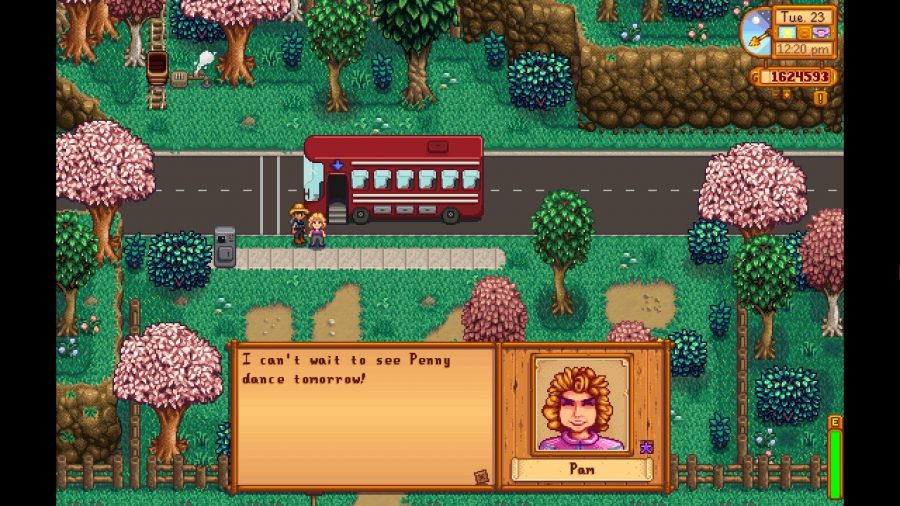 After talking to Karina, I felt justified in my decision to change Shane. I downloaded mods that added new romantic dialogue to eligible NPCs, that changed villagers’ sprites with each season, and that overhauled my farm completely. Playing the game still felt like coming home, just to a different but still loveable roommate.

However, my experiments in Stardew Valley soon came to an abrupt halt.

Meet Ava in real life. After I started modding Stardew Valley, one of the many mods I use is one that lets your pets follow you.

In September 2018, I lost one of my pet cats to a careless driver. The entire incident haunted me for weeks. Every time I shut my eyes, I would watch the scene play out in my head. I couldn’t stop it. Ava’s death hit me hard. It became difficult to sleep. I withdrew from the world. She was a rescue cat, like all our cats. A grumpy old tabby looking for a new life. We were meant to be her forever family – the people who would love her unconditionally. And I failed her.

It was early October when Karina messaged me. She’d sent me a link to a download that was simply titled ‘catv3.zip’. Curiosity got the best of me, and I installed the mod into my Stardew game.

For a while, nothing seemed different. Had I wasted my time? Had the mod not worked? My questions and worries built upon each other as I played. It wasn’t until Marnie showed up on my doorstep with a cat that I finally broke down. 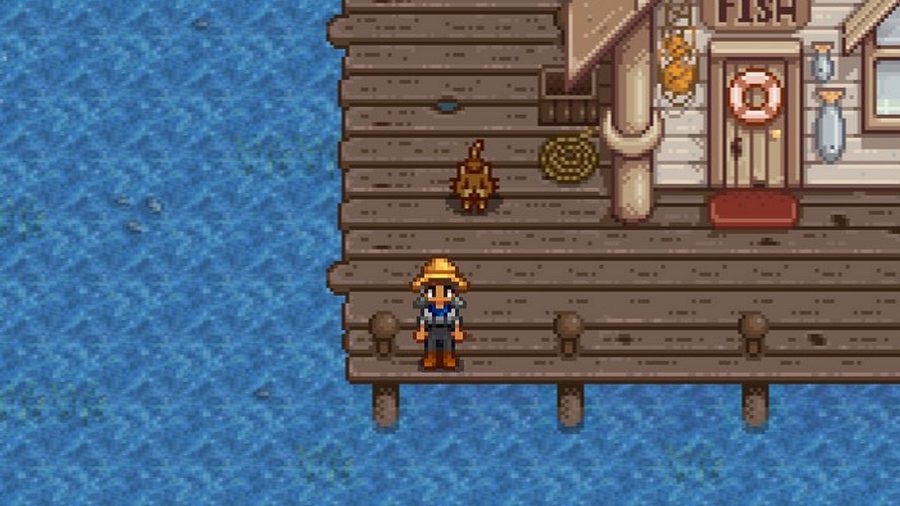 There she was. My Ava. Preserved forever in pixels.

A great weight lifted off my chest. What had previously felt like playing god was now a key factor in my healing. They say home is where the heart is, and the Stardew Valley community really is proof of that. It was a harsh healing process, but I have found solace in those pixels.

Ava has a happy little life on my farm now. I don’t really visit that save file much anymore because I don’t think that I need to. I stopped playing during the in-game summer season. My farmer married Sebastian, getting him out of the basement he used to live in. I like to imagine that Ava’s lying in the grass, relaxing in the sun, just like she used to do. I’ve finally given her the life that she deserves, and that’s enough.