First things first, if you want to excel in Stardew Valley, don’t bother with animals. Yes, I know they’re cute and generate a bit of money every day, but they also waste time every morning and you can’t automate their care. The secret to success in Stardew Valley is using high-value crops to make artisan goods, then selling those goods – sorry, but it’s true.

Unfortunately, you can’t make artisan goods right away, as you need to level up your farming skill to unlock the devices required to make them. So, for at least the first month, you’ll mostly be selling crops raw. Yep: no animals and cold cauliflower. What a life.

For the purposes of this guide, we’re assuming you want to make the most money in the shortest amount of time, with little interest in building friendships, rebuilding the community centre, fishing, and any other foolish unprofitable activities. This is all about cold hard cash.

As such, your days should follow this basic pattern: maintenance in the morning (watering, planting, collecting goods, etc.), mining in the afternoon. Keep everything you gather that isn’t crops or goods – that includes gems, ore, stone, and wood. Everything. In the mines, aim to descend as quickly as possible. You can always come back later if you need ore from earlier floors. 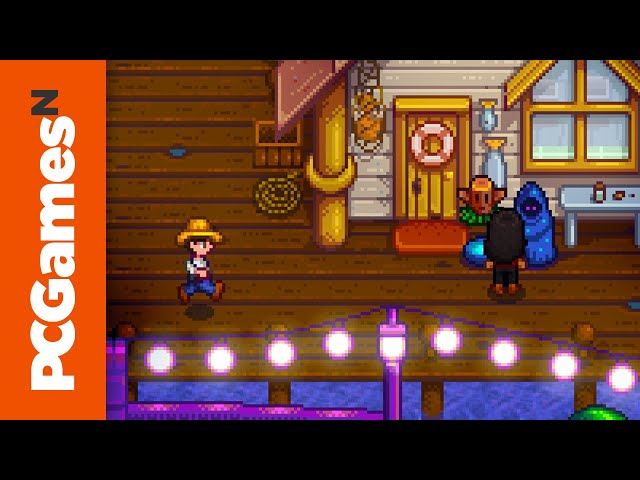 Don’t rebuild the community centre – you get some small perks from it, but getting town upgrades via the Joja Warehouse is much, much faster. Getting a Greenhouse built and the minecarts repaired should be top priority. Tool-wise, focus on upgrading your pickaxe first. The others are non-essential, if handy, but your pickaxe needs to be upgraded to get through the mines at a decent clip.

Without further ado, here’s a quick run-through of the best way to optimise your first year, season by season. Important note: your skills may level at a different pace, which will change how early or late you can do certain activities. 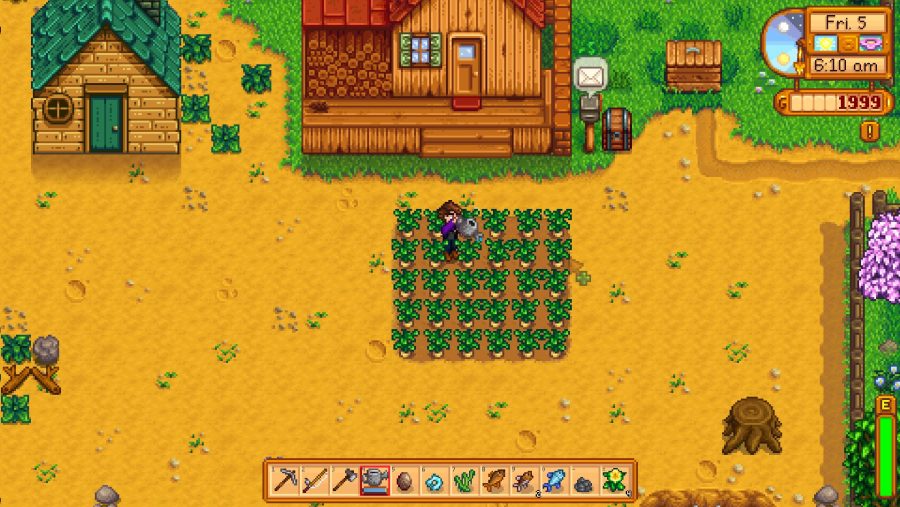 Your principal crop in Spring are strawberries, but you can only buy strawberry seeds at the Egg Festival on the 13th of Spring. While you’re waiting, plant parsnips or potatoes. Make sure to save up as much money as possible for the Egg Festival, and try and line up your timings so that you can sell a big crop on the 12th.

On the 13th, buy as many Strawberry Seeds as possible. You only need to plant them once as the bushes will regrow. They take eight days to grow fully then they produce a crop every four days. This’ll give you at least three full crops as long as you plant them before the 13th ends.

By the end of Spring, you should have levelled your Farming skill enough to unlock basic sprinklers, so make a bunch of those as soon as possible and lay them out like so: 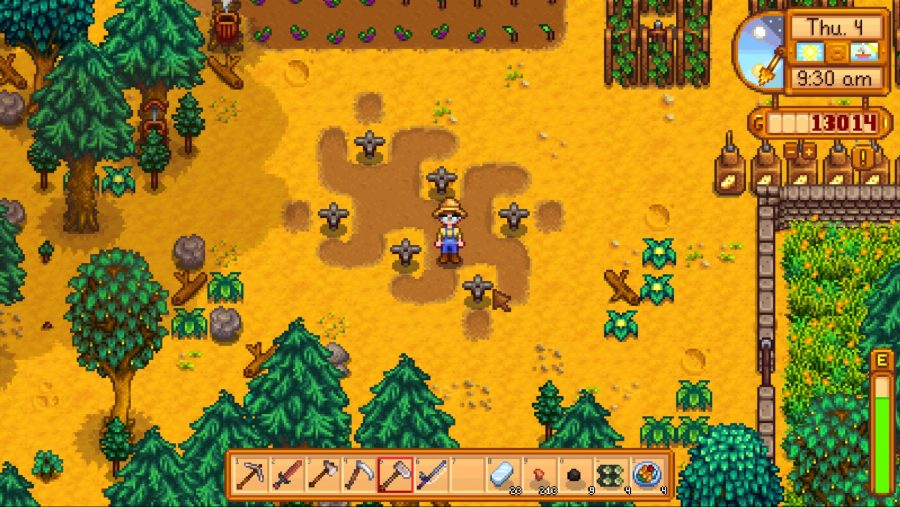 What you plant in Summer depends on how far you’ve levelled your Farming skill. If it’s under level four, plant Blueberries – they’re not high value individually, but you get several berries per plant, and you don’t have to regrow them after harvesting. As a raw crop they yield the highest profits. However, if you have levelled Farming to at least level four, you will have unlocked the Preserves Jar, and should plant Melons instead.

Like to collaborate? Here are the best co-op games on PC

The Preserves Jar turns fruit into jam and vegetables into pickles. These artisan goods are worth double the base crop price + 50g, and take approximately three to four days to process. You always want to use the highest value crop possible in a Preserve Jar, hence Melons (base price 250g, jam price 550g) are a better bet than Blueberries (base price 50g, jam price 150g). 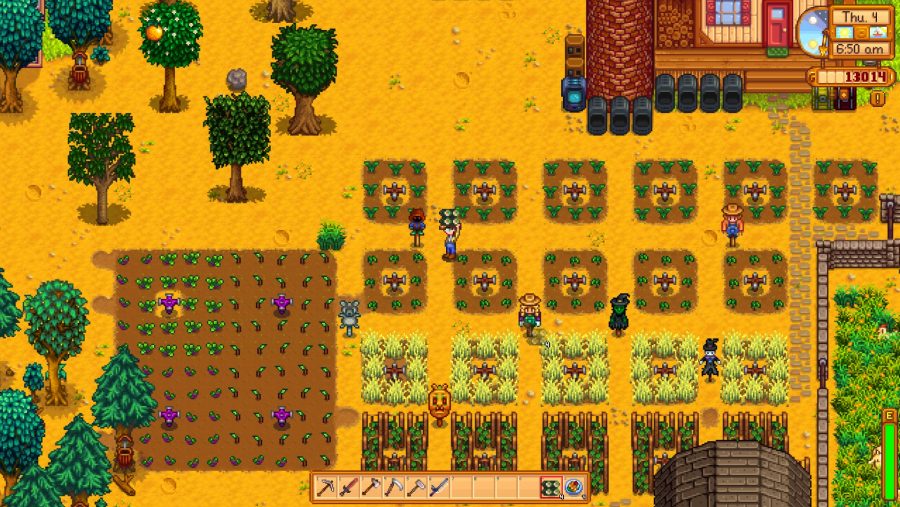 Craft as many Preserves Jars as you can, as they’re fairly cheap to make (50 wood, 40 stone, eight coal), and you should have plenty of materials stashed from mining to make them.

If you hit level five farming then choose Tiller as your specialisation. It’s not very useful, as you’ll rarely be selling crops raw, but it does allow you to pick up Artisan at level ten, which substantially increases the value of artisan goods.

Pumpkins are your best bet for Fall. Cranberries are higher yield as a raw crop, but Pumpkins are worth more per unit, making them better for the Preserves Jars. Grapes are a similar value and grow faster, but they also grow on trellises that block movement, making them a pain to bulk produce.

By this point your profits should be increasing at a decent clip, so expand the size of your crops, build more Sprinklers and Preserves Jars, and upgrade your tools – you might even want to build your first Shed, a handy building that can hold 67 Preserves Jars.

Hopefully, you’ll unlock Quality Sprinklers in either Fall or Winter. Craft as many as you can and lay them out like so: 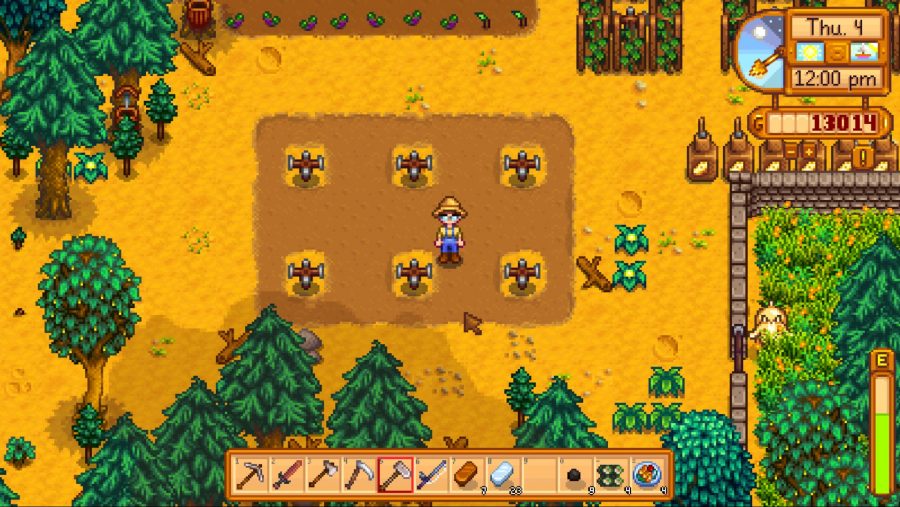 Some savvy Stardew veterans might now be wondering why we haven’t suggested you move on to making Wine in Kegs by now. It’s simple, really: wine is overrated. Wine has a higher base value than jam (triple the base fruit value), true, but it takes around seven days to process. Though high value, Wine brings in far less profit on a day-to-day basis than jam.

Sadly, no crops can be planted in Winter, save for Winter Seeds. You need Foraging level seven to create Winter Seeds, and they require four different foragable plants to make ten seeds. Winter Seeds grow random Winter wild plants (Crocus, Crystal Fruit, Snow Yam, Winter Root), which aren’t worth all that much, but it’s better than nothing.

Winter is going to be a lean month. But if you can manage to build the Greenhouse before Winter hits then proceedings will run much smoother. You can grow any crop at any time of the year in a Greenhouse – so as long as you’ve saved some seeds from a previous season, you’ll be golden.

This a good time to talk about Ancient Fruit. Ancient Fruit is one of the highest yield crops in the game, with a base price of 550g per unit (1150g per jar of jam), and it grows in every season except Winter. It’s also extremely rare. 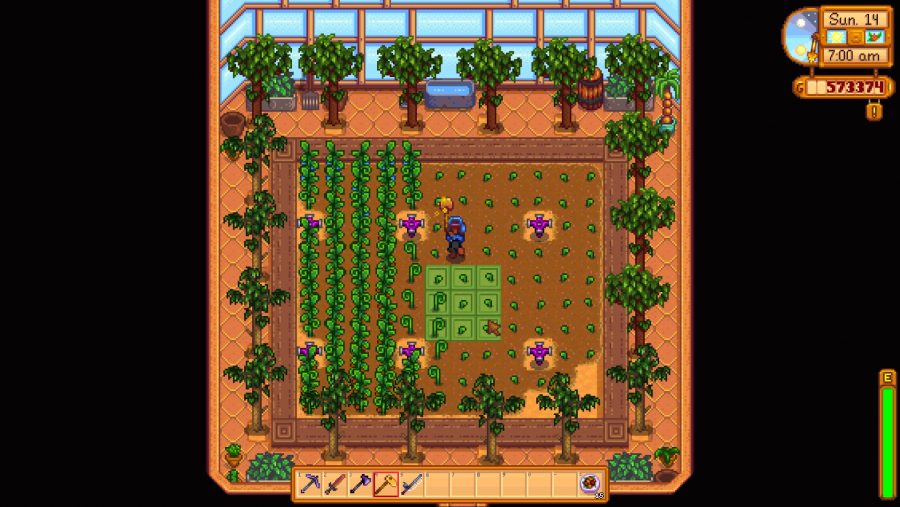 To grow them, you need to find an artifact in the mines called ‘Ancient Seed’, which you can donate to the library in return for one pack of plantable Ancient Seeds and the recipe to turn any future seed artifacts into the plantable version.

Not willing to share those profits? Try the best free Steam games

This Ancient Seed plant will take a full month to grow, and after that will yield an Ancient Fruit every seven days. Do not sell these. Keep them in a chest (don’t worry, they won’t go mouldy) until you reach Farming level nine, when you’ll unlock the Seed Maker.

Once you have that you can process each fruit in it to create one to three Ancient Seeds. Plant those, harvest them, turn them into seeds. Keep going until you have enough to fill your greenhouse with them. If you can gather enough Ancient Seeds you can plant a full crop at the start of Spring and simply harvest them all year round. You will have more money than you know what to do with in no time.