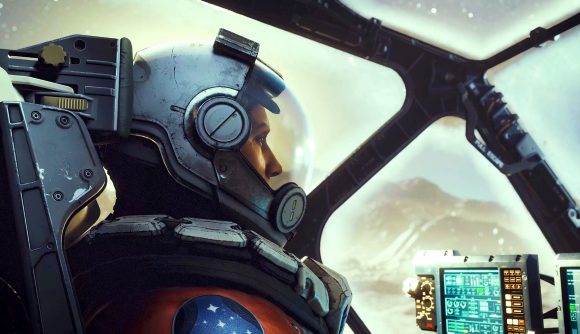 While many have been dubbing Starfield as “like Skyrim in space” – including its own director, Todd Howard – there’s no doubt that it’s going to have an entirely distinct aesthetic of its own. Not least because we’re talking about a futuristic RPG in space rather than a fantasy epic in an ancient Nordic-style land. Now, we’ve got an even better idea of the style Bethesda’s aiming for with the space game, which it has coined as “NASA-punk”.

“Early on in this project when we were trying to establish the overall aesthetic of this game, we sort of coined the term ‘NASA-punk’ to describe a sci-fi universe that’s a little more grounded and relatable,” lead artist Istvan Pely says in a new Xbox Wire post. “We wanted a very realistic take. You can draw a line from current-day space technology and extrapolate from there into the future so it’s believable and relatable.”

“What’s really interesting is how much we all latched onto that concept,” adds lead animator Rick Vicens. “When you said NASA-punk, the art team could instantly take those two words and make them work. It was just the perfect term for our art direction and keeping everyone in same flow and working with a consistent style. For me, it just clicked. At the start of the project, I think that term was critical for us.”

This theme of it being grounded is one that’s emerged as we’ve heard more about Bethesda’s next major game. Todd Howard explained last year that Starfield is “more grounded” than its iconic behemoth of a predecessor, Skyrim, though it still has that magic “step out” moment as you head into a marvellous new world.

We’ve also been able to get a sense of Starfield’s world, and how it looks and feels, through snippets revealed over the past year. We got a good peep at concept art for a bunch of its locations and ships during a Skyrim anniversary concert last year, a portion of which was dedicated to Starfield’s score, and while much of it looks strange and otherwordly, the retro-rustic style of its places and spacecrafts comes across.

We also see that “NASA-punk” style reflected in its teaser trailer (above), in which we can see notes that are reminiscent of the space programs and astronauts we recognise from our own world, though with some notably punkier, more rough-and-ready-looking gear and aesthetics.

The Starfield release date is November 11, 2022, though we should be getting another look at it this summer, likely at this year’s Xbox and Bethesda showcase during E3.