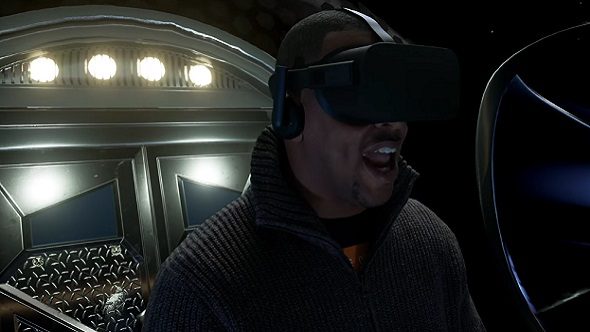 We’ve been burned before by Microsoft promising we can interact with in-game characters using only our voice. RIP, Milo. Still, technology has come a long way since the Kinect reveal, so this new project, powered by next generation natural language processing, could well deliver.

You can’t talk to the aliens here, but our list of the best space games will give you a glimpse at some lovely galactic vistas.

Starship Commander, as the name suggests, makes you a commander of your very own starship, and will work in both SteamVR and Oculus.

Created in Unreal 4, it uses a blend of FMV and lovingly rendered environments to get the job done. You’ll be using your voice to manoeuvre the ship, open docking bay doors, fire up the weapons, and steer the branching narrative. Check out the trailer above.

Considering this is apparently the technology of the future, it’s weird how ‘90s it looks, isn’t it? Very Wing Commander-esque.

Developers Human Interact are using Microsoft Cognitive Services to make the speech recognition as good as it can be. Apparently it will even pick up words they haven’t specifically put into the game, so that’ll be me just swearing at everyone I meet.

Have a watch of the developer diary for more: