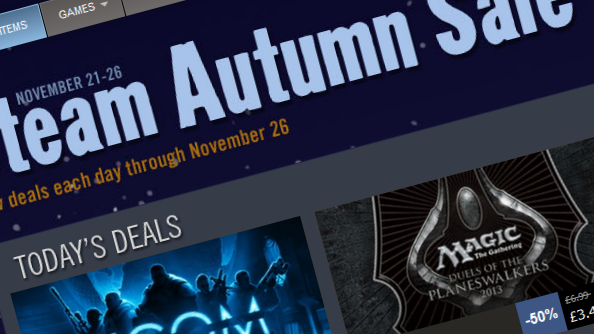 It looks like the dates for this year’s Autumn and Winter Steam sales have been leaked, with the Autumn sale reportedly kicking off at the end of next week on November 25th. It will be followed in December by the Winter Holiday sale on December 22nd.

The Autumn sale is due to run a full week until December 1st, while the Winter sale will run almost two weeks, finishing on January 4th 2016.

The information comes from a Steamworks developer group post, which was discovered by users on Reddit. The post not only divulged the dates the next two sales will apparently be running on, but also revealed that Flash and Daily Sales will not be returning.

“In past sale events, we’ve asked for two discounts—a duration discount that runs for the length of the sale, and a feature discount that runs in the event that a game is featured on the front page,” the post explains. “This year, to optimize the sale for customers and to allow us to feature and recommend your products in more ways to more customers, we’re asking for just one discount, to run the length of the sale.”

Games will still be featured on Steam’s front page for 24-48hrs, but their discounts will remain constant for the whole period.

Flash and Daily Sales are often seen as the highlight of the Steam Sales, with games being heavily discounted for just a short period. If you were lucky enough to spot them, you could net yourself quite the deal. Without them, are games going to be heavily discounted for the entire sale, or will be miss out on that extra few percent? On the upside, at least you don’t have to hang around all week waiting and hoping that the game you want will appear in the sale.