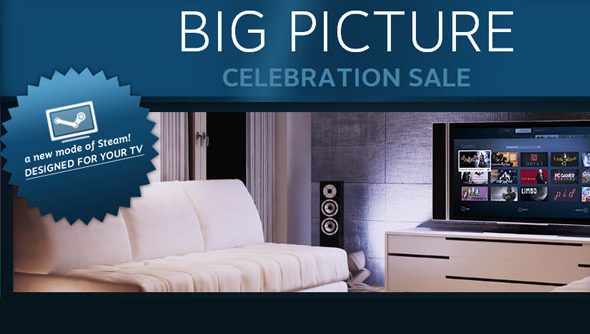 PC gaming on the big screen. It may seem like something that would only be realised in our children’s lifetimes but, nay, Valve have made it possible to upscale our games to a televisual box with the minimum of fuss. Previously in beta, the new Big Picture Mode provides a platform to fully control the Steam client and games from the comfort of your sofa/bed/bath with your console controller. The shift from beta marks a new symbol to be broken out across the site “controller supported”, letting you know if the game’s full support or partially support controlled play.

There’s also a massive sale on games that fully support the use of a controller.

Steam’s Big Picture Mode entered beta back in September time, marking the first public test of a long discussed living room mode of Steam’s client, the system itself had rarely been seen at play prior to its beta. Its existence had often been pointed to as evidence for, or maybe confused with, a possible Steam console.

The full release is an extremely good thing for we PC gaming folk. Big televisions make great stomping grounds for computers, they’re more powerful than the consoles, they produce better visuals, and so make a good deal better use of those high-def, widescreen, panoramic, wall-filling machines. Plus, we have mods.

Our version of Dark Souls, which we had to petition to get, can be vastly improved over the console version – uncapping the framerate, upping the texture resolution, and adding beards– all with wonderful, wonderful mods. So next time your console-playing buddy sits down on your sofa, you can show off why your neon-covered tower, that sounds like a hovercraft when booting up, isn’t “ridiculously expensive and, frankly, a sign of moral bankruptcy in this time of ecological crisis”.

You can check out the games that are on sale over here.