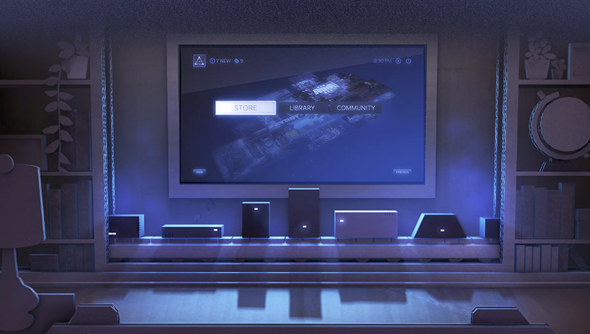 The second part of Valve’s week of mad announcements has just gone live. The company have developed a hardware prototype that plugs into your telly box and runs SteamOS. They’re looking to test the machine this year and will be shipping 300 of them out to folk on Steam.

Valve are keen to make clear that this isn’t the one and only Steam Box but instead a hardware prototype that runs the SteamOS. Other manufacturers will be making their own machines.

“Entertainment is not a one-size-fits-all world,” write Valve. “We want you to be able to choose the hardware that makes sense for you, so we are working with multiple partners to bring a variety of Steam gaming machines to market during 2014, all of them running SteamOS.

“While these products are still in development, we need your help. As always, we believe the best way to ensure that the right products are getting made is to let people try them out and then make changes as we go. We have designed a high-performance prototype that’s optimized for gaming, for the living room, and for Steam. Of course, it’s also completely upgradable and open.

“This year we’re shipping just 300 of these boxes to Steam users, free of charge, for testing.”

Valve are letting anyone apply to be part of the test and it’s pretty easy to get onto their list.

Doing all those actions will unlock you a badge and stick you on the list that testers will be randomly selected from.

You have till the 25th October to apply.

Valve say that you’ll be able to buy a Steam Box from one of the participating manufacturers in early 2014.

Valve don’t make it clear but it does sound like their machine will be going to market. They describe it as being “designed for users who want the most control possible over their hardware.” Other folk’s machines “will optimize for size, price, quietness, or other factors.”

The specs of the machine will be released soon.

The other plus of being a tester is that you gain access to the “nearly 3,000 games on Steam. Hundreds already running natively on the SteamOS, with more to come. The rest will work seamlessly via in-home streaming.” That’s nice.

What are you waiting for?

Or, you can read Monday’s announcement here.