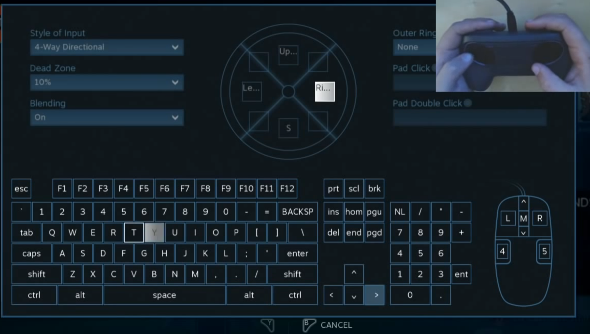 You may have had some pretty awesome PC-related gear for Christmas this year, but unless you were one of the 300 people Valve sent a prototype Steam Machine to, you’re probably not the talk of the town. Presenter of YouTube channel Trial By Game did find a Steam Machine in his stocking though, and has uploaded a range of videos showing off games being played with the fancy new controller. From Dota 2 to.. um.. Typing of the Dead, take a look at how they all fare right here.

First up: Dota 2. Unfortunately the beloved MOBA doesn’t fare that well, and it’s not all that surprising considering the heavy reliance on keys that Dota has. The main problem though seems to be having to control your character as if you were using a mouse. If Dota were to have a specially design controller set-up akin to Diablo 3’s console port, where characters were controlled directly rather than with point-n-click actions, then potentially a killer match of Dota 2 would be achievable on the pad.

Rogue Legacy fares much better, and watching the footage the only real problem you can see is that it’s obviously played using a controller rather than a keyboard. And if that’s the only major problem, then it looks like the Steam Controller at least works as well as its counterparts. Trial By Game does note though that he had a problem using the button in the centre of the track pad, where trying to push it caused him to squeeze the whole controller, which resulted in him pressing the rear button too.

Designed with controllers in mind anyway, Super Meat Boy seems to work really well using the Steam Controller. We already knew that this was the case, since Super Meat Boy creator Tommy Refenes has already spoken out about it. But in this video there’s little to poke fun at.

Finally, Trial By Game tries out Typing of the Dead for a bit of a laugh. Turns out that whilst the Steam Controller’s keyboard layout does seem intuitive, the Steam Overlay pauses the game whilst you type, meaning provided you can spell from memory, Typing of the Dead poses no challenge at all.

The Steam Controller prototype seems to perform pretty well then. There’s the obvious issues of it not working as well as a keyboard and mouse combination, but a controller is never going to match that experience, so seeing how it performs in comparison to the beloved Xbox 360 pad is what we should be looking at. There are a few niggles, but hopefully Valve should use all this feedback from users like Trial By Game to tweak and perfect the controller before final launch.