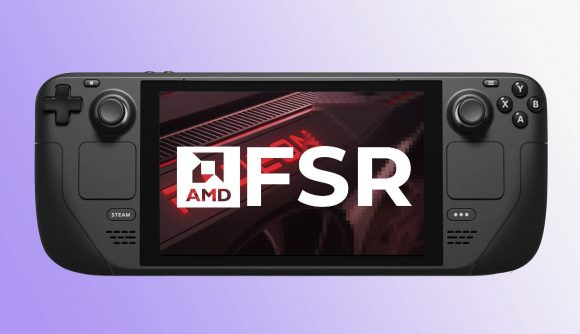 AMD’s FidelityFX Super Resolution integration is coming to SteamOS, meaning every Steam Deck game will have access to the upscaling tech. Spotted by Phoronix, FSR compatibility is now included with Gamescope, Valve’s Linux-based compositor that handles games on the upcoming handheld PC.

Prior to the Gamescope update, 70+ games could use AMD FSR to boost fps and balance clarity. While that’s still the case on Windows, Valve’s Steam Deck FAQ says “FSR support will be included as part of an OS future release. Once that happens, games could potentially make use of FSR even if the games themselves don’t natively support it.”

It’s worth noting that even with AMD FSR enabled, the Steam Deck’s screen resolution will be capped at 1280 x 800. However, the upscaling solution could enable Valve’s portable to maintain performance when paired with a 1080p gaming monitor. This could make all the difference when using a USB-C dock, as it should help games run with slightly higher settings enabled.

While AMD FSR could be a Steam Deck game changer, we’ll know exactly how much of a difference it’ll make once it arrives on February 25. The portable won’t trade blows with the best graphics cards, but it’s stacking up to be the comprehensive, low-spec gaming PC of our dreams. Over 100 games are now verified as compatible with the device, and playing free Epic Game Store downloads without installing Windows 11 might also be an option.