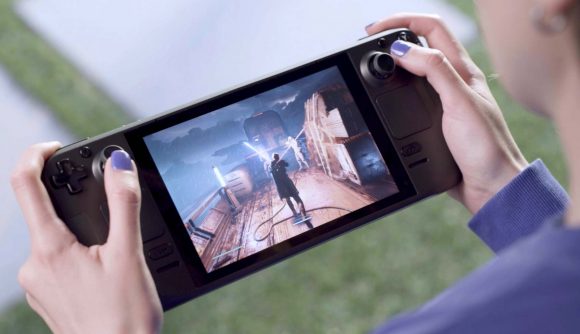 One of the most important specs that defines the success of any portable gaming device is battery life, and the Steam Deck is no exception. Valve estimates that users can expect anywhere between 2-8 hours of playtime from its handheld gaming PC, but the company seems to be working on driver-level enhancements that could help push this even further.

According to a recent merge request on GitLab, as spotted and very helpfully explained by Phoronix, it appears that Valve engineers are working on Vulkan Radeon driver improvements. More specifically, to better control how VRS (Variable Rate Shading) behaves at a driver level, in a bid to improve power savings.

If you’re unfamiliar with VRS, it enables the shading quality of particular parts of a frame to be rendered at varying quality levels. This is useful in all videogames, particularly racing games like Dirt 5. For example, it allows car models to retain the highest shading quality possible, while fast moving peripheral elements like the environment have a lower shading rate, thus freeing up performance and decreasing power consumption.

It’s unclear how Valve plans to change the behaviour of VRS, but Phoronix suggests that the company could be looking to adjust the feature depending on whether the Steam Deck is running on AC power or off its 40Whr battery. We’ll just have to wait and see if we notice any differences whenwe get our hands-on with the device, come February.

In the meantime, there’s plenty to read up on and get excited about when it comes to the Steam Deck, like Half-Life 2 getting a new UI to make it more suitable for the portable powerhouse. Additionally, the company announced a new Dynamic Cloud Sync feature, which should help moving between Steam devices all that much easier.