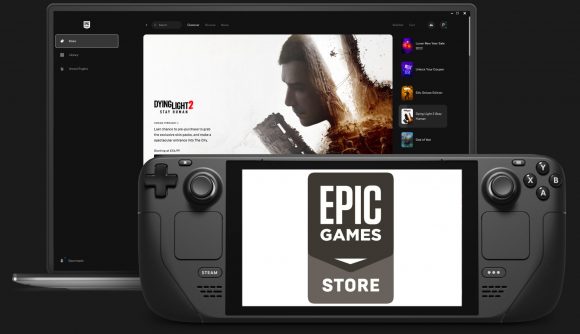 One of the most exciting features of the Steam Deck is that it isn’t beholden to one storefront, but it’s not exactly easy to access your Epic Games Store library. Officially, Valve says you’ll need to swap out SteamOS for Windows and give up all those juicy optimisations. Unofficially, you can use the Heroic launcher directly in Proton, and it just received an update that will potentially make it easier to navigate on the handheld.

Nicknamed ‘Rayleigh’, its 2.1.0 patch contains several new improvements for Linux users to enjoy, including persistent window sizes and positions, the ability to check the status of Epic servers, and a UI facelift. The headline features, however, are controller support in the menus and a virtual keyboard to search your library.

The Steam Deck isn’t name dropped in the patch notes, as the update instead focuses on compatibility for Xbox One, PlayStation, and a few generic controllers first. That said, the patch comes at a curious time considering the Steam Deck release date is just around the corner, and this undoubtedly lays the groundwork.

While Valve is hard at work to ensure that most games on Steam are verified as playable on the handheld, recently passing 100 compatible games, there’s no guarantee that your Epic Games Store library will work as smoothly – although you might spot an overlap between the two.

This is a pretty neat way to get through your backlog and all those free games Epic keeps giving out, though, and you hopefully won’t need to jump through hoops to get it working.