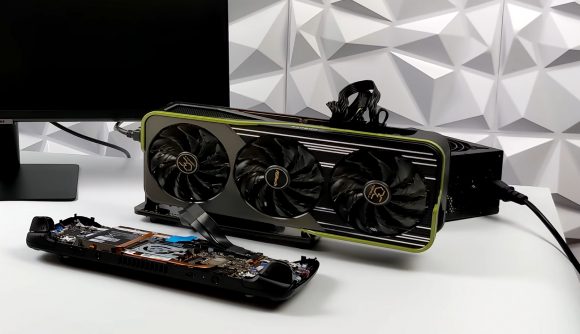 Steam Deck external GPU connectivity is now a thing, thanks to the creative efforts of tech YouTube channel ETA Prime. Pairing Valve’s portable powerhouse with one of the best graphics cards comes with a multitude of caveats, but the unconventional project could help fuel our imagination when it comes to potential Steam Deck 2 features.

Valve’s handheld is inherently limited in terms of Steam Deck external GPU connectivity, as its USB-C connector isn’t Thunderbolt compatible. To get around this, ETA Prime uses an M.2 to PCIe 3.0 to hook up a graphics card to the Deck’s internal SSD connector. Sadly, the tech tinkerer didn’t have much luck using Nvidia GPUs, but the AMD Radeon RX 6900XT seemingly plays nice with the portable.

While the adapter features two 8-pin power connectors, the YouTuber also connects a full power supply directly to the ravenous Radeon card. Since the Steam Deck’s M.2 connector is now reserved for GPU connectivity, ETA Prime uses the MicroSD card slot to boot Windows 11 on the janky setup, magically transforming the handheld into a conventional, but messy desktop gaming PC. 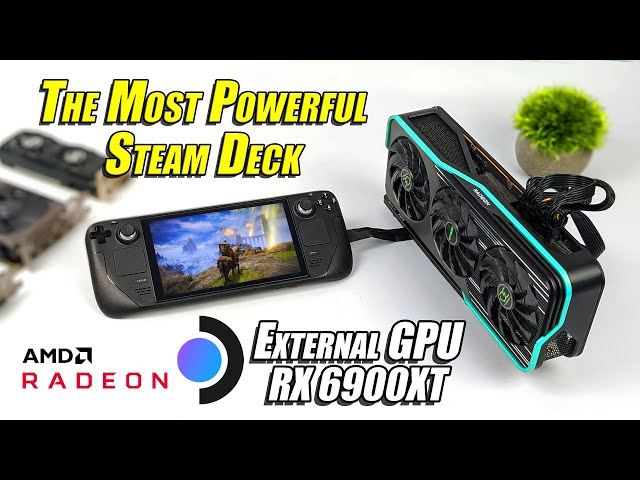 ETA Prime’s impractical experiment proves that it can boost fps on Steam Deck, even if CPU bottlenecks hold back games like Cyberpunk 2077 and God of War. That’s not to say we’d suggest discombobulating your Deck to give it a try, but the whole affair has already inspired GPU case mockups on Reddit.

The current version of Valve’s handheld PC probably won’t get official external GPU support, but a future Steam Deck dock could bring a new level of versatility to the device. Such ambitions will likely be reserved for the Steam Deck 2, but the DIY community may conjure up a more practical solution for the here and now.