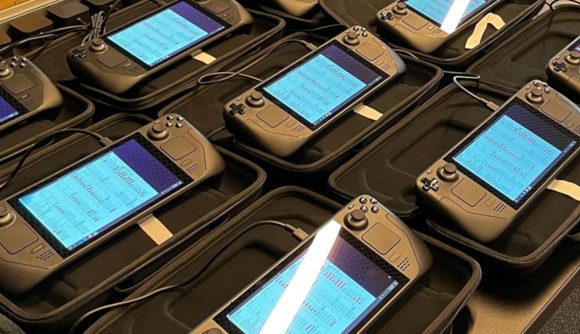 Valve has finally announced the launch date for its handheld PC, the Steam Deck. Customers who reserved Steam Decks with deposits last summer will begin getting invites to complete their orders on February 25. The first Steam Deck units will then begin shipping February 28.

Here’s how Valve says it’ll work for customers who reserved Steam Decks last year. At some point on or around February 25, you’ll receive an order email from Valve that invites you to complete your Steam Deck purchase. You’ll have three days from the time of that email to login and order your Steam Deck, and any reservations that aren’t completed in that time will be released and given to the next person in the virtual line.

Valve says invites will start going out at 10am PT / 1pm ET / 6pm GMT February 25, and they’ll be sent in the same order that they were received. You’ll only be able to order the Steam Deck model you reserved – you can’t upgrade or downgrade to a different Steam Deck.

However, your deposit will of course count toward your total cost at checkout, and Valve says shipping costs are included in the Steam Deck price. Valve also says that it will be sending out review units to the press “shortly,” so hopefully we’ll have a chance to put one through its paces before the Steam Deck release date.