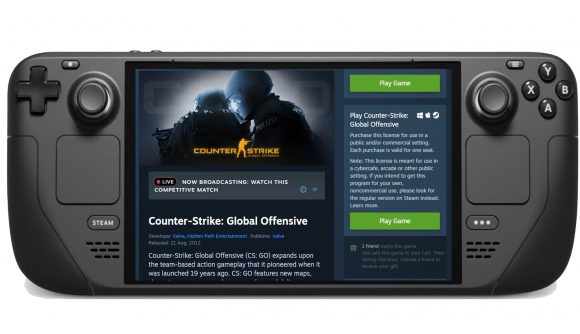 Valve’s Steam Deck handheld system releases later this year – at least, for those lucky enough to have pre-ordered very early – but one of the bigger question marks is how Steam itself will look and run on the console. Now we finally have an idea of how the Steam Store will look in the new “tablet mode” coming to Steam Deck.

We’ve long known that Steam’s Big Picture mode was getting replaced with whatever version of Steam would be running with the Steam Deck – even for those that don’t own the handheld – but Valve hasn’t really offered a good idea of how it’s actually going to look, or how users will interact with the Steam Store on the new UI.

Thanks to SteamDB creator Pavel Djundik we now have our first preview of how the store will look on the Steam Deck’s new UI – which Valve is apparently also calling “tablet mode”. The screenshots can be seen in Djundik’s tweet below, showing the Steam Deck’s version of pages for Counter-Strike, GTFO, the search page, and account details.

By the look of it, the new UI is quite a straightforward design that’s obviously been built for touchscreen controls. Most of the information is in a bar to the right, including the price and purchase button, and the search page looks like it features a pop-out preferences box. Check it out below.

Valve are working on getting the Steam store ready for the Steam Deck (they also call it a tablet mode). pic.twitter.com/PP4QMtbIKZ

The Steam Deck will begin shipping in December for a lucky few, and the new UI will probably replace Big Picture mode in the PC version of Steam around the same time. Valve is definitely taking the Steam Deck seriously, including hiring people to test all 50,000+ games on Steam in the handheld – it’s even patched Half-Life 2 for the first time in years.