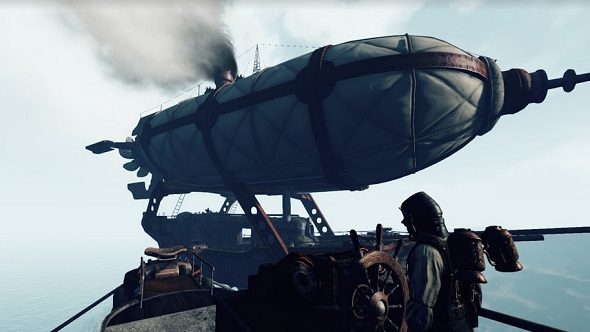 Following a successful Kickstarter campaign and two years of work down in the foundry, Steam Hammer is ready to take to the air with its first major beta test. Set in a tumultuous steampunk world, Steam Hammer has up to 64 players scrambling for resources and land on the Acribo Islands, following a devastating airship crash.

For more open world antics, check out this list of the best PC sandbox games.

Hoping to service the untapped market of steampunk enthusiasts and survival game fans, Steam Hammer has players establishing their own steampunk colony on this quiet island chain. With no overarching goal to accomplish in Steam Hammer, players can choose to devote their life to building a Victorian utopia, or becoming a dastardly airship pirate or even creating the perfect farmstead. There is no fixed class system either, with players developing skills depending on their desired playstyle or in-game goal. You want to be a farmer who is also a skilled sniper and gunsmith? Go right ahead.

As the Victorians had a penchant for building massive construction works without considering the environmental cost, players in Steam Hammer can dig out huge mines and quarries to service their mammoth forges and factories. Besides terraforming the Acribo Islands, friendly colonists can band together to build towns and outposts to service their expansion and research. You will need to consider defensive works as well, with floating turrets and steam jetpacks helping defend your settlement from any flying ne’er-do-wells.

Leaning to the ridiculous end of the steampunk technology spectrum, Steam Hammer can have players building steam-powered motorcycles, Tesla generators and even machines of living flesh. If you side with the Victorian technocrats, expect to see plenty of steam machines while the Acribian rebels use occult morphing mechanisms to power their inventions. Each faction has its own weapons, architecture and research tree so choose wisely during character creation.

For those interested in moving out to the Acribo Islands, players can now buy beta access to Steam Hammer from its official website for $11.99/£9.99. Steam Hammer is planned to enter Steam Early Access later this year, with early adopters gaining access to the full game for no extra cost.