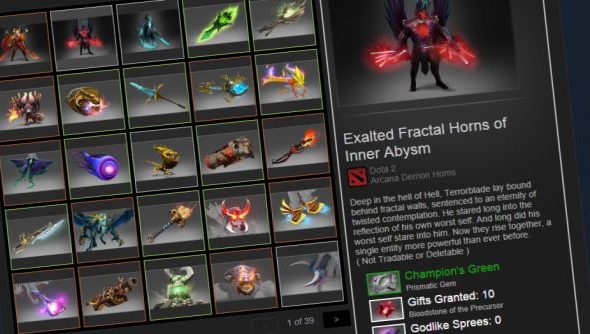 This is my Dota 2 Steam inventory. It’s rather messy – after all, it represents over 1500 hours spent within the game. Games from Valve aren’t the only ones that have the ability to generate persistent items; others such as Path of Exile, Spiral Knights and Warframe also use the inventory system.

Today, Valve have opened it up to any Steamworks developer to use, allowing them to use Valve’s tech to create and store items earned or bought within their games. It also opens up the Steam Marketplace for players to sell the items to the rest of the community.

Valve’s use of the inventory and marketplace have been bedrock features of their most popular titles; starting with Team Fortress 2, it also extended to Dota 2, Counter-Strike: Global Offensive and even non-competitive games such as Portal 2.

“With today’s Steamworks SDK update, we’ve released The Steam Inventory Service beta, a new feature available to developers with games or software on Steam.” reads the Valve announcement. “The Steam Inventory Service is a set of new Steamworks APIs and tools that allow a game to enable persistent items that have been purchase or unlocked by individual users without having to run special servers to keep track of these user’s inventory.

“With this service, a game can easily drop items to customers based on playtime or can grant items based on specific situations or actions within the game. These items can be marked as tradable through Steam or sellable via the Steam Marketplace. Developers can also configure recipes for crafting different combinations of items that result in more rare, unique, or valuable items.”

Can you think of any nifty items that would be cool to earn in your favorite games?