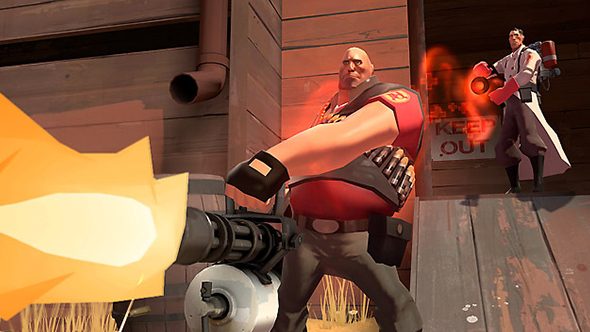 Recently, a new method was uncovered to estimate game sales on Steam, working out the most played games by using achievement data. Valve quickly changed its API to cut that method off, but not before somebody grabbed the numbers, did the math, and combined the results with a machine learning algorithm to figure out the top 1,000 most played games on Steam.

That person is Sergey Galyonkin, the creator of Steam Spy. When Valve’s profile privacy changes cut off Steam Spy’s data earlier this year, Galyonkin noted that he was working on a machine learning technique to provide similar results, but that the data wasn’t yet accurate enough to be relied on. It seems the achievement tracking technique filled the missing gap.

Big? Small? It doesn’t matter, these are the best PC games.

Galyonkin’s findings should be accurate through July 1. Of course, with achievement-based tracking now cut off by Valve, the numbers won’t remain accurate for much longer.

Since this info is based on achievements, any game without achievements to track won’t be represented. Most of Steam’s biggest games support the feature, but there are some heavy hitters that don’t have achievements – Dota 2, for example, may have topped the list if it could be tracked.

Nonetheless, the list still presents some fascinating data. The top 25 titles are listed below, and you can see the full list of 1,000 at Ars Technica, which republished the findings with Galyonkin’s blessing. 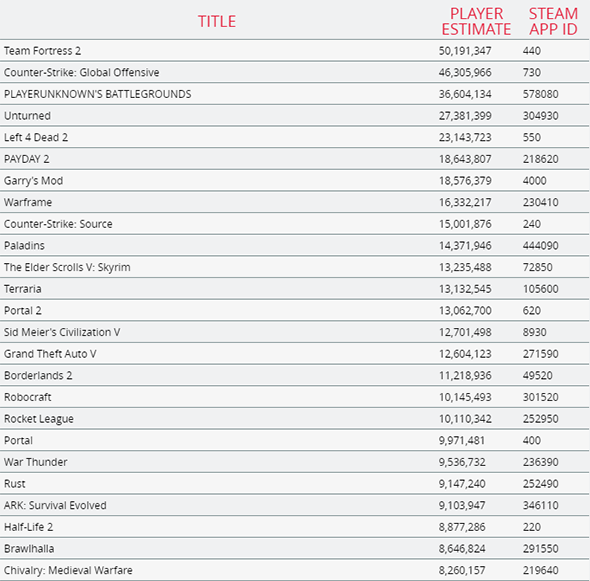 It should be no surprise to see the free-to-play Team Fortress 2 in the top spot, nor to see that PlayerUnknown’s Battlegrounds has quickly risen to number three. But not everything is the sort of game you typically see in the mainstream gaming news circles. Free-to-play titles like Unturned, Robocraft, and Brawlhalla are high up on the list as well.

Not everything has a social aspect, either. Some of the top 25 titles include Skyrim, both Portal titles, and Half-Life 2, proving there’s still some life in single player.

Steam’s opaque sales numbers keep coming back into the conversation, as Valve continues cutting off avenues to access the data. The company spoke about creating its own Steam Spy alternative with more accurate data, but more recently shut down the achievement-tracking method of sales estimates. We still have public access to concurrent player counts thanks to Steam’s front-end and SteamCharts, but for total players – and the sales guess that provides – all we have now is this moment in time.