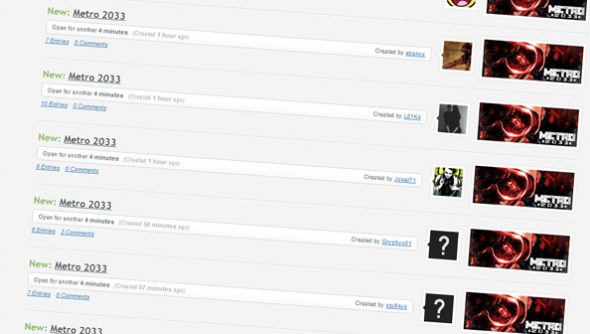 You might not be able to get THQ’s Facebook page to load right now. It’s touch and go, because the canny publisher is giving away Metro 2033 in return for a simple ‘Like’ and suddenly everybody is Liking THQ.

On a related note, Steam gifting site SteamGifts has been flooded with copies of a certain post-apocalyptic FPS.

SteamGifts is a place for the sharing of Steam-bought games with strangers. Steam users make time-limited posts for giveaways a la eBay, said strangers ‘bid’ and a winner is chosen.

It’s worth noting that Metro is also part of the ongoing Humble THQ Bundle, which is nearly single-handedly making up the other half of SteamGifts’ trades today.

Metro: Last Light looked absolutely lovely in its new trailer, also released this afternoon. THQ’s willingness to dip into their enviable back catalogue to support their future seems very shrewd indeed to me. What do you think?