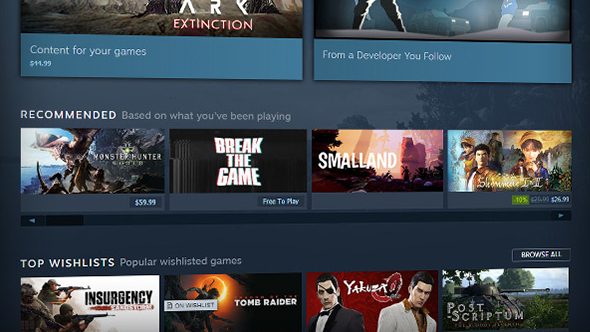 The Steam interface is slowly changing in bits and pieces, and the latest change comes to the store’s Upcoming Releases list. The homepage has dropped the full list of upcoming titles, and now shows a tab marked ‘Popular Upcoming,’ which Valve says is a “smarter, more tailored list” of what’s coming soon.

This new tab builds from Steam’s appraisal of interest in upcoming games, with data coming from sources like wishlists, pre-orders, and the success of past titles from the publisher or developer. The tab will also personalize its offerings for you, showing titles from companies you follow and games you’ve wishlisted, and will remove those options you’ve marked as ‘not interested.’

Don’t worry, if you want a truly curated list, we’ve got you covered with our selection of upcoming PC games.

The Upcoming Releases page shows a bit more granular detail, with games recommended based on what you’ve been playing, top wishlisted titles, and upcoming DLC for games you own. This page is also the place where you can see the “raw, unrefined deluge of new games” if you need to know about absolutely everything that’s on the way.

In the blog, Valve says “We believe Steam does a good job of taking early customer interest (even if that interest isn’t enormous) and helps a game amplify that interest through connection to quality customers. This smarter list on the front page aims to do just that.”

Of course, that might be concerning to tiny developers whose games no longer even have a moment on the front page, but Valve says it’s accounted for that. “It’s clear to us that a brief (and sometimes very brief) spot on Steam’s front page isn’t useful if your game is shown to a random set of customers – what’s best for everyone is if your game is shown to the right customers, ones who have shown that they might like your game.”

For today, at least, the Popular Upcoming tab showcases plenty of small titles. I count seven games I’d never heard of coming out tomorrow alone, but it’s a much more manageable list of games than the nearly 40 that are actually going live on that date – and it’s a list that leaves out many of the zero-budget games Steam has become infamous for.

With more and more Steam games released all the time – last year alone saw over 7,600 – offering a way to sift through those titles and find relevant stuff is essential. Whether this, or new Steam curator options, or developer homepages, or whatever else Valve puts in place actually helps remains to be seen.