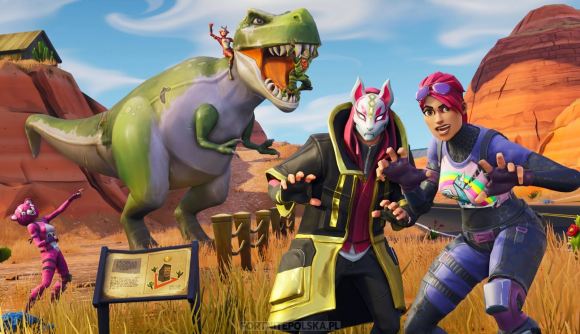 Steam might be something of a PC gaming institution, but it’s easy to forget it’s not necessarily the universal powerhouse you might expect. In a recent interview on Russian podcast How Games Are Made (documented on Resetera), Epic’s director of publishing strategy and Steam Spy founder Sergey Galyonkin said that only half of all Fortnite players have Valve’s platform installed.

That’s still plenty of people, of course. The latest Fortnite player count reported that 200 million people have played Fortnite, and it’s worth remembering that the game is very popular on consoles and mobile. That suggests about 100 million Steam users, even with all those other platforms, which is by no means insignificant, even if those proportions are slightly surprising.

But the bad news for Valve goes deeper. Galyonkin goes on to say that of those 100 million or so Fortnite players who do use Steam, only around 40% are using it on a regular basis – meaning that only 20% of Fortnite players overall are regularly using Valve’s launcher. Again, that’s still an active crossover of about 40 million, but it’s not a major slice of either Fortnite or Steam’s userbases.

Two of Galyonkin’s co-hosts, who are developers of Hello Neighbour: Hide and Seek (one of the Epic Games store’s launch titles), say that those numbers speak to a significant userbase that isn’t really aware of Steam’s impact on the industry. Those figures drove the developers to opt for an Epic store release rather than a Steam one, a decision that’s also been taken by Ubisoft over The Division 2.

Read more: The Epic store is getting Steam-style refunds

Elsewhere in the podcast, Galyonkin also reveals that if a developer opts for an exclusive release on Epic’s platform, the company will offer financial incentive, and will do off-site marketing for the game without mentioning the store itself.

It’s worth pointing out once again that this simply speaks to two very different userbases – Steam still boasts a monthly player count of over 90 million. But if nothing else, the success of Fortnite reaffirms that its popularity isn’t entirely set in stone.