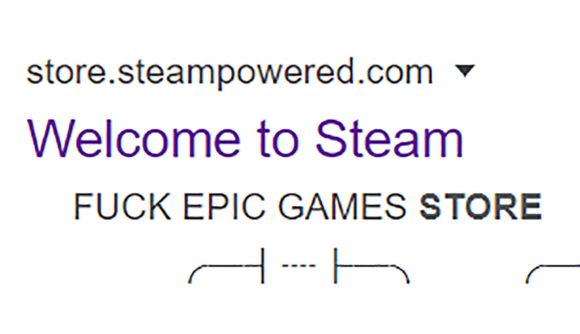 February 19, 2020 It seems the offending text might be from a user’s game review.

There’s no easy way to say this: Steam is currently displaying a message that reads “Fuck Epic Games Store”.

The message appears in the description underneath the Steam store’s official result in a Google search of the term. The description has been changing between the aforementioned message and the synopsis of a Japanese horror game named The Convenience Store, but PCGamesN has captured a screenshot of the crude oddity, which you can see below. The message appears for multiple staff members on different devices.

It’s unclear how this could have happened, however it’s possible the text originates from a user’s game review on Steam which the Google search could have pulled out. As spotted by VG24/7, there is a Metro Exodus review on the platform containing the same text and characters, which appear to match the text seen via the Google search. While it’s not confirmed, it could be that the Google search brought up this up from the ‘Steam Labs Recommendations’ section at the bottom of the homepage, where reviews are shared. We’ve reached out to Valve for clarification.

Since its launch in 2018, the Epic Store has attracted criticism from some gamers for its policy of securing exclusive games. However, it has proved popular with developers and publishers for its more generous revenue split, which means game makers take a greater cut per sale than they do on Steam.

The Epic Store takes a 12% cut of any game sale, whereas Steam operates a sliding scale of taking 20-30%, depending on total sales of the game in question. 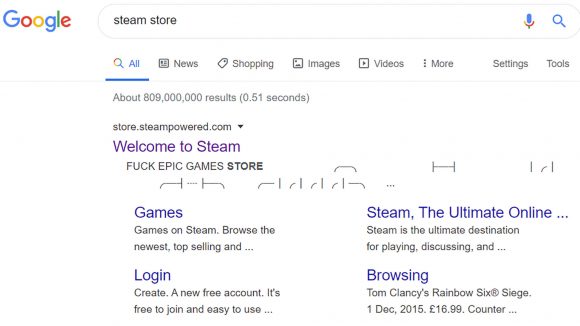 In addition to grabbing exclusives, the Epic Store’s main selling point is the free games it gives away each week. This week’s Epic Store free games include Assassin’s Creed: Syndicate and Kingdom Come: Deliverance, among other titles.