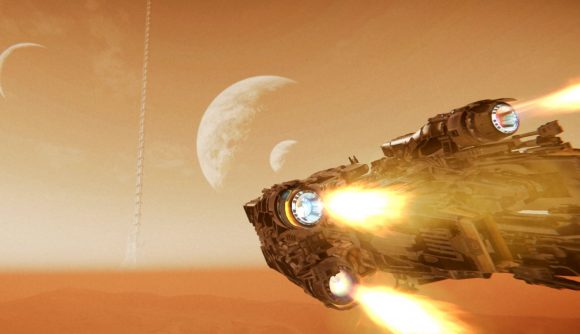 Valve is taking steps to remove games that involve blockchain technology in order to use cryptocurrency like Bitcoin and non-fungible tokens – NFTs – as game mechanics from Steam. Blockchain tech, and NFTs in particular, have become a hot topic in tech lately, with several new PC games using the technology in various ways, either in cryptocurrency mining or as a new concept for microtransactions. Valve’s new onboarding guidance prohibits the use of these mechanics, and some games have already been delisted from the platform under the rules.

As NME reports, Valve has updated its onboarding guidance for SteamWorks, Valve’s API for publishing games and mods on Steam. The rules and guidelines included in this document have been updated, specifically the items under the heading ‘What you shouldn’t publish on Steam.’ This list includes obvious stuff like hate speech, sexually explicit images of real people (i.e., pornography), and malware.

Now, however, the list has grown. A new bullet point prohibits “Applications built on blockchain technology that issue or allow exchange of cryptocurrencies or NFTs.”

Age of Rust, a single-player sci-fi game that uses blockchain-based tokens for equipment and weapons, has been de-listed from Steam already, its developer says.

“Steam’s point of view is that [blockchain-backed] items have value and they don’t allow items that can have real-world value on their platform,” the developer writes in a Twitter thread.

Steam's point of view is that items have value and they don't allow items that can have real-world value on their platform. While I respect their choice, I fundamentally believe that NFTs and blockchain games are the future. It's why I started this journey with all of you.
3/4

The developer, Space Pirate Games, says it will continue development on Age of Rust while it seeks another publisher. It seems other NFT- and cryptocurrency-based games, such as MIR4, will likely have to do the same.

We’ve reached out to Valve for further comment on this story.