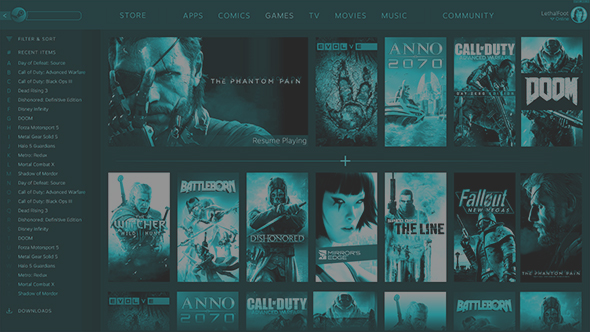 Nearly a year ago, a batch of files inside a Steam client beta offered a glimpse of a new Steam UI – a radical departure from the interface we’ve known, loved, and hated for years now. As with most Valve-related projects it’s faded into relative silence, but it seems designers at the company are still working on the redesign.

Add a few more items to your Steam library with the best PC games of 2017.

Valve will be hosting a developer gathering in Italy later this month. Asked if there would be any news on the UI update at the event, product designer Alden Kroll offered the most Valve-like response imaginable.

Yes: We're still working on it 🙂

Kroll even want as far as confirming that the update would be done within the next 40 years (hopefully).

Goofs about “Valve time” aside, it’s good to have confirmation that the UI refresh is coming. Changes to the Steam interface have come only in bits and pieces, and they’re often more focused on the store than the client as a whole. Recent Steam updates have suggested that Valve want curators to be a much more central part of navigating the store, but we’ve yet to see what else would be changing in future updates.

Last year’s leak showed off client featuring tabs for apps, comics, TV, movies, and music, and Steam has been getting filled with more and more non-gaming content in the last few years. That was a mere mock-up from a long time ago, however, and there’s no telling what the final redesign will look like.