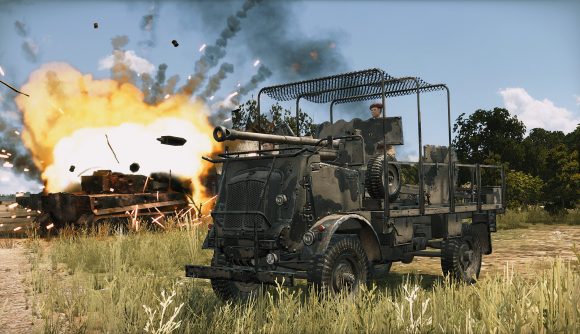 French developer Eugen Systems has been busy with the Early Access launch of its new Cold War-era RTS Warno lately, but that doesn’t mean it’s moved on from its most recent WW2 game, Steel Division 2. A new historical expansion pack is out today that pays tribute to the Italian Campaign, and it includes eight new divisions and more than 300 new individual units.

Tribute to the Liberation of Italy includes historical units that were involved in the Italian Campaign, specifically in the areas north of Rome in 1944. Axis forces in the pack include 5. Gebirgsjäger mountain troops, the 4. Fallschirmjäger, the 26. Panzerdivision, and the Italian nationalist 4a Divisione Alpini “Monterosa”.

On the Allied side, the pack adds the 6th South African Armoured Division, the Corpo Italiano di Liberazione, the 8th Indian (Infantry) Division, and Task Force 45 – a singular and short-lived formation made up of Japanese-American and Brazilian anti-aircraft artillery soldiers who were reassigned as infantry while in theatre and used their AA guns as improvised patrol and close support weapons.

These units will be able to field some 300 new units, which include four new aircraft models, 22 new vehicle models, new infantry squads, and plenty of variants.

It should be noted that this expansion does not include a new Army General campaign, but future DLC is currently in the works for the “not-too-distant future” that does add new dynamic campaigns to the game.