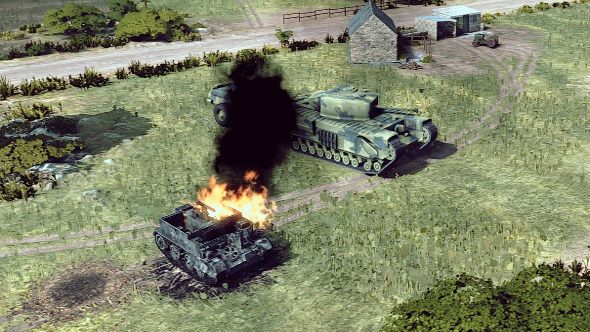 The intimidating Panzer rumbles down the pockmarked French country road in the more bucolic of the two maps available in Steel Division: Normandy 44’s beta. It’s prowling for targets, namely my brave troops, all members of the 15th Scottish Infantry Division. I don’t have any tanks of my own, but huddled behind the trees on either side of the road are a handful of my soldiers. Waiting.

They strike as the tank passes, tracers cutting through the air, bullets pinging off its incredibly thick shell. The Panzer is unharmed, shrugging off even this relentless assault, but not so the men stuck inside it, crammed in like sweaty sardines. The noise and the chaos is too much for them. They panic, and this deadly warmachine falls back. It’s a brief victory for the underdogs, and it’s all thanks to Steel Division’s stress mechanic.

Eugen System’s World War 2 Wargame spin-off cares a great deal about logistics and supply, armour and guns – all the moving parts and ingredients of battle. But amid all the numbers and stats, the armour ratings and bullet counts, it doesn’t forget that there are flesh and blood soldiers, sometimes bold and brave, sometimes terrified and stressed, fighting in this war. Their psychological state matters just as much as the tools that they use. 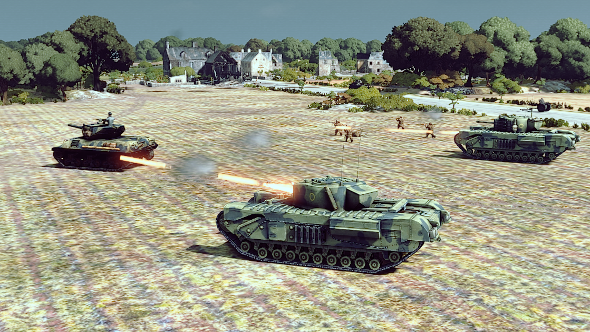 Stress is the expression of Steel Division’s suppression system. When a unit starts to take fire, its stress meter increases. The bullets don’t even need to hit their mark – as long as they’re close, units react to the danger. How much the stress meter increases is determined by the proximity of the danger. If a unit actually gets hit, the meter jumps up and the soldiers enter a stressed state.

Different unit types react in distinct ways when they become stressed. Vehicles, like the aforementioned Panzer, have two different states. A vehicle becomes shaken when the meter reaches 50%, causing it to start moving backwards. You can still control the vehicle, giving it orders, but there’s a risk involved: it may become panicked. If that happens, when the meter is full, all control is lost and it retreats. Things are a bit simpler with air units, which leave the map once the meter is full. 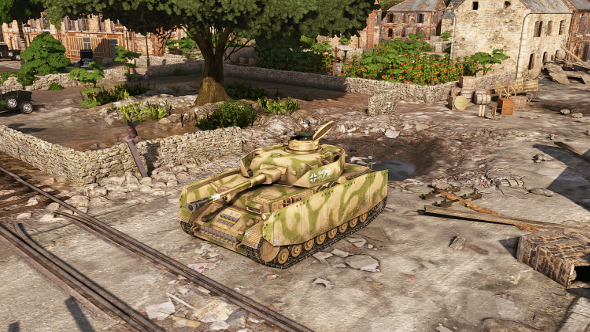 Since fleshy infantry are considerably more vulnerable, they’ll hit the ground instead of automatically falling back, which also means that they’ll stop firing, effectively becoming useless. Unless they stop being under fire, they won’t accept any orders other than the retreat order, which will send them running for the nearest cover. If they’re in enemy territory, surrounded, and without a leader unit nearby, the unit may even surrender and be taken out of the battle permanently.

Shock and awe, then, is a particularly important tactic. Not surprisingly, artillery prove to be especially handy when trying to scare the hell out of enemies. Though not especially accurate, they can bombard enemy positions with suppressive fire, giving front line units an opportunity to charge at terrified foes, forcing them to capitulate. It’s an intimidating display. Steel Division is a striking, detailed game, and you can get right up close to the action, watching vulnerable soldiers drop like a sack of potatoes as the little French farm they’re cowering in is turned to rubble, and explosions and smoke fill the area. 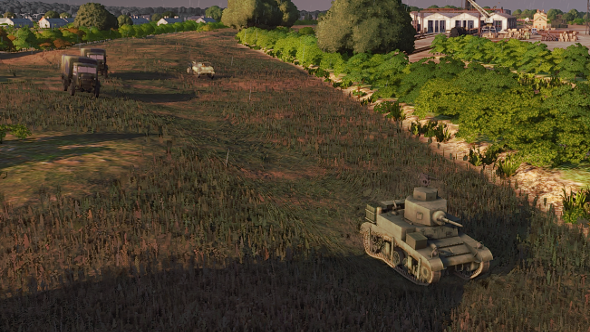 When falling victim to it, the stress mechanic takes control away from you, which under some circumstances might be a bit frustrating, reminding you that you’re more of a general than a god of the battlefield, but you’re not left without options. It highlights obstacles that need to be overcome and gives you time to counter the source, the attack, potentially before the unit is lost.

Importantly, it also makes it feel like a comeback is possible. Fleeing units can be sent back into the fray, and next time you’ll have extra intelligence that could keep them in the fight for longer. And It creates a much more natural flow to battles, with units moving and acting logically, where victory or failure isn’t simply a matter of destroying enemy units or watching your own being destroyed. 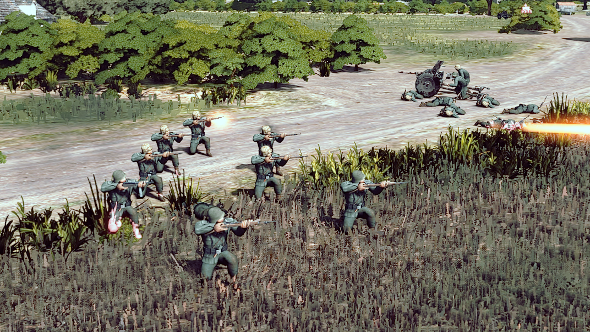 As the attacker, you can win battles through guile, even when facing heavily armoured enemies. You might face that unit again, but in conquest mode in particular, where victory is claimed by taking the most territory, forcing an enemy to retreat can be even more effective than destroying them outright. While more realistically simulating the intense pressure of warfare, the stress mechanic simultaneously creates situations that evoke more romanticised tales of valour and determination – heroes who send superior forces packing through a relentless and surprise attack.

Even within groups, like infantry, it’s not a one-size-fits-all mechanic. When designing your division, it’s worth taking the composition of your force into account in regards to stress. Untrained (or unwilling) troops are more likely to become too stressed, more advanced units can handle more and squad leaders can inspire a bit more bravery among nearby soldiers. That doesn’t mean you should avoid units with less mental fortitude, however. They cost less, allowing you to potentially field more units, overwhelming the enemy through superior numbers.

Stress and suppression are, thus far, the most intriguing parts of Steel Division: Normandy 44, feeling both thematically appropriate for the World War 2 setting while also making it stand out from its progenitors like Wargame: AirLand Battle. Though it shares similarities with the morale systems found in some turn-based wargames and the Total War series, it’s more an evolution than a replication, encouraging players to engage with it or prepare for it rather than just being a threat.