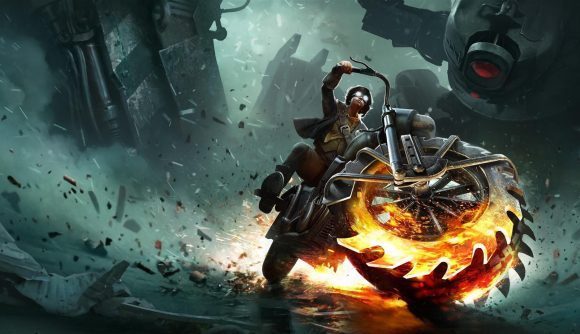 Trials, Biker Mice from Mars, and Road Rash. Take these three games and fasten them together with a few screws and you’ll get the framework for Steel Rats. We’re giving away 20 Steam keys for it below.

Steel Rats is a game about riding a motorbike with a circular saw for a front wheel through a load of invading alien robots. It’s not set in the far future but in an alternative version of 1940s USA. Given there are exhausts that spout flames that can be used as a weapon we may as well chuck in a reference to Mad Max: Fury Road, too.

So let’s explain how all these different pieces of media factor into Steel Rats. As with Trials, it’s a physics-based 2.5D game, so you get across the screen in a 3D world, but it’s heavily industrial – all dark steels and drizzling rain bouncing off factory rooftops. You can even pull off sick stunts. What’s the point of saving the world if you can’t look slick doing it?

Biker Mice from Mars… well, it’s sci-fi and there are motorbikes. Giant Martian mice yet to be seen. Moving on, Road Rash is where the game’s violent combat comes in. Instead or wrapping a metal chain around people’s heads you can, instead, churn through the robots with blade wheels, shotguns, and harpoons.

There is a story to uncover, too. In Steel Rats, the invading robots are called Junkbots, which you can discover more about by exploring Coastal City, unlocking new areas and finding secrets along the way.

Do you want your own chrome stallion with a saw blade attached to the front? Oh, go on then, we’ll give you one, but only if you win our giveaway for 20 Steam keys that’ll unlock Steel Rats. You can do that via the widget below.