Steelseries have a style – one that they’ve confidently stuck with for multiple generations of headphones – and the Arctis Pro Wireless doesn’t change much in that regard. What it does deliver, however, is stunning audiophile-grade audio, superb comfort, and unprecedented connectivity.

Still rocking earbuds? Here are the best gaming headsets of 2018.

The Arctis Wireless Pro is the quintessential wireless headset for gamers. Built upon the foundations of the Arctis headsets before it, SteelSeries have tweaked their winning formula to make sure they stay in front of the competition.

Premium is the name of the game with the Arctis Wireless Pro, and it plays it well. The Airweave ear cushions are airy and comfortable, and despite the wireless tech packed inside its aluminium and steel shell, the Arctis Pro Wireless manages to stay fairly lightweight at 371g. The famed Arctis adjustable head support design manages to keep any of the extra weight from the wireless doodads inside from directly resting on top of your dome – although it only comes with a single plain black ski-goggle band this time around.

The left earcup features a volume wheel and microphone mute button, while the right features power and Bluetooth buttons – which also double up as voice and music controls. While the volume wheel is certainly preferred to volume buttons, it is very easy to nudge the wheel while taking the headphones on or off, or when adjusting the fit, and that can be a little frustrating after repeat offences. 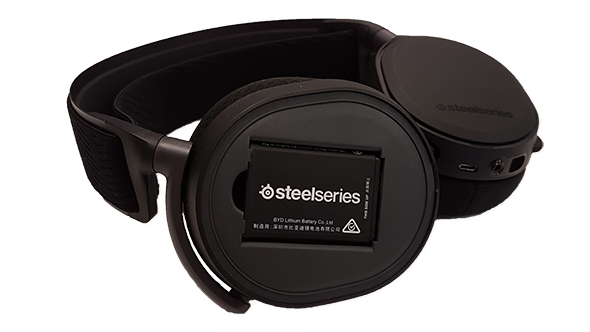 The right headphone houses the removable battery, hidden under a magnetic cover for easy access. A single battery will net you 10 hours of battery life, but you get a total of 20 hours thanks to the extra battery included in the box. The interchangeable battery design means you’re realistically unlikely to run out of juice even if you defy sleep for 20+ hours, as one can always be charging – although, please do consult your doctor.

Steelseries have made sure to pack in a cable for nearly every eventuality – including a charging cable, 3.5mm audio cable, toslink optical cable, and a USB audio cable – but wireless is, of course, the Arctis Pro’s forte.

For general use then, lossless 2.4G is provided from the base station, which also doubles up as a settings hub. Features include: a volume dial, EQ controls, chatmix controls, battery monitoring, and a bunch of other minor settings to tweak to your liking. The base station also performs as the battery charging station, with a battery-sized slot on the side to keep a battery totally juiced up at all times.

Bluetooth 4.1 connectivity is also available for all of your portable devices, and if all else fails, you can wire the headset in with either the proprietary SteelSeries USB to 3.5mm jack connector or the standard 3.5mm to 3.5mm jack cable included. The 3.5mm jack on the headset also has a secondary function, allowing you to split the headphone audio to another device or headset.

The Arctis Pro isn’t simply getting a passing grade due to its connectivity, however. The audio quality easily surpasses what we’ve come to expect from many gaming headsets. The Wireless Pro features 40mm Neodymium drivers with a frequency response of 10hz to 40,000Hz. Bear in mind that the wireless version tops out at a maximum sample rate of 48kHz, rather than the 96kHz of the wired GameDAC equipped version.

The result is a crystal clear soundscape that even a discerning audiophile wouldn’t turn their nose up at. Individual sounds are reproduced with incredible clarity and accuracy across the entire range. 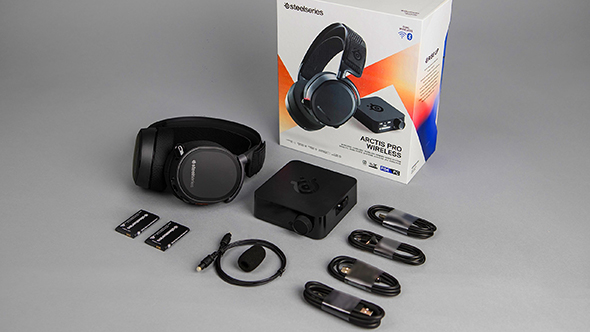 The Pro Wireless’ crystal reproduction and distinct directionality does have one harrowing effect, however. It turns gaming into a frightfully immersive experience, with audio cues vividly reproduced in such a way as to trick your mind into thinking something is going on just beyond your periphery.

Most gamer-focused cans and popular high street headphone brands tend to focus on powerful bass at all costs, but the Arctis Wireless Pro focuses far more heavily on a flat sound and accurate reproduction. Therefore, bass is often very soft and subtle, and can be subverted by the mids and highs when less prevalent within a track. This effect does tend to be less noticeable in action-focused titles and FPS shooters that favour exceedingly-heavy bass samples throughout, and you can easily boost the bass via the built-in EQ if the balance isn’t quite to your liking.

The Arctis Wireless Pro is equally well-equipped for voice chat. The bidirectional microphone is attached to a retractable boom arm that wraps right into the headset itself. It features clear audio, great background noise cancelling capability, easy chat mix controls through the base station, and all-in-all is a painless experience to adjust on-the-fly. It also features the little red LED, identical to other Arctis models, that should make it excruciatingly obvious when your mic is muted. 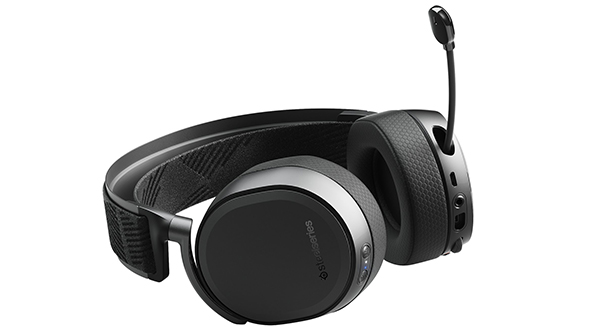 But it would be remiss to throw praise at the SteelSeries Arctis Pro Wireless without commenting on the price – which may be a sticky issue for some. The headset is on the shelves for $330 / £300, while – spoilers – our previous top wireless gaming headset, Razer’s Thresher Ultimate, only cost $250 / £210.

But is it worth the price premium? Unequivocally, yes. SteelSeries have created a headset that satitates both my requirements as a pretty sociable gamer, and my (worryingly) growing audiophile tendencies. And all that without the wires.

If gaming is priority numero uno for you, music fidelity a close second, and cost a distance third, then the blend of exemplary mic, flawless wireless functionality, and tone-perfect audio reproduction the Arctis Wireless Pro will suit you to a T.