Gamers are currently obsessed with shaving off every gram in order to have the best gaming mouse, but this doesn't leave much room for the Logitech G502 lovers burdened by a hefty weight to keep the elongated style and assortment of macro buttons. Thankfully, the SteelSeries Rival 5 is a fantastic lightweight alternative, and it's only a wireless dongle and unlockable scroll wheel short of becoming my ideal gaming mouse.

You'd be forgiven for mistaking the Rival 5 for the Rival 600 at first glance, but their similarities are skin deep. It's still a right-handed rodent that features what I'd consider the most beautiful RGB lighting on the market, but SteelSeries does away with the adjustable weight system, rolls the dual sensors into a single, one-to-one tracking beast, and shifts the side buttons to a layout Logitech fans will recognise.

At just 85g, however, the Rival 5 is 30% lighter than the wired G502 and all the better for it. It even shifts the garish G7 and G8 macro buttons that sit on the G502's left clicker to a more intuitive switch above the back and forward buttons, which still has a bit of a learning curve, but I find myself using them far more.

Some of you might miss the tried and tested Omron clickers on other mice, but the Golden Micro IP54 mechanical switches on the Rival 5 are better in most cases. They have a deeper clunk when you bottom them out, which benefits streamers with the best gaming microphone that are trying to get rid of intrusive sounds, they boast better dust and water resistance, and they’re just as satisfying to press. They supposedly last at least 80 million clicks, which is three times more than competitors, but ratings are usually just a battle of how long brands are willing to test them rather than a testament to how long they’ll actually last. 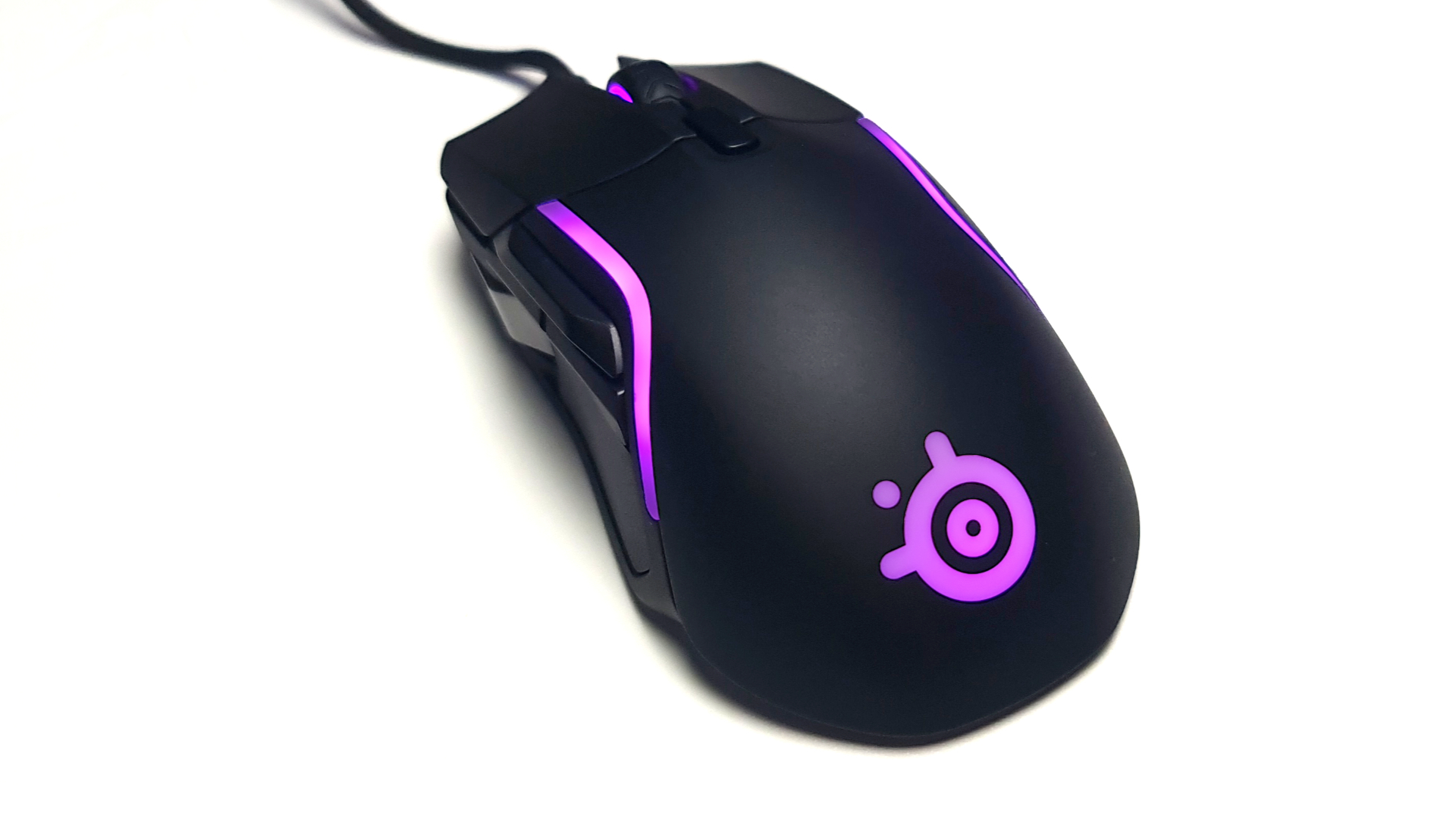 As usual, you’ll need to download the software to customise the lighting or rebind macros – you have the option of SteelSeries Engine or the newer Windows-exclusive SteelSeries GG suite, which combines Engine with its Moments game capture tool. They’re both excellent apps that make it easy to personalise all ten lighting zones and nine programmable buttons. There are plenty of integrations with games and apps like Discord that make use of the gorgeous RGB lighting, too.

Unfortunately, there’s a limit to the Rival 5’s on-board memory that makes it a little too reliant on software. It only has one on-board profile that can store your DPI, polling rate, lighting brightness, and mouse button mappings. All other settings, like angle snapping, acceleration, and the colour of your RGB lighting require the software open in the background, otherwise you’re stuck with the default. This isn’t necessarily an issue if you’re running the mouse as your daily driver, but it’s a little less plug-and-play if you’re taking it from the best gaming PC to the best gaming laptop. 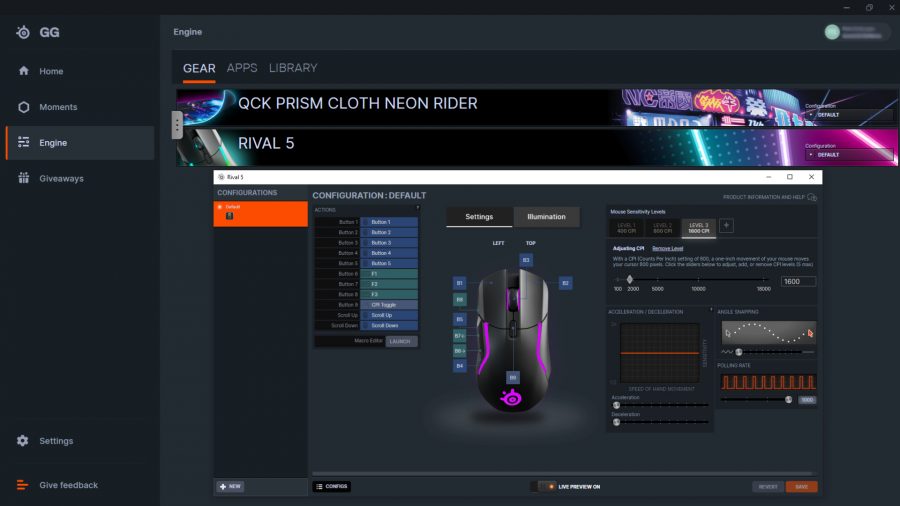 One-to-one tracking returns from the Rival 600, and sure enough, I experienced no random judders swiping it across SteelSeries’ own best mouse pad.

It’s the tilt tracking that really impresses me, though, which previously required a second sensor to gauge the distance as you lift the mouse, but is now baked into a single sensor. It prevents your cursor from moving whenever your mouse is more than 0.5mm away from the surface, which is instantly noticeable. I find myself hitting shots much easier in Rainbow Six Siege because there’s less of a jiggle between picking it up and placing it back down. It’s a standout feature that I’d love to see more often.

The Rival 5 is a joy to hold with curves in all the right places, no rubber grips to get grimey, and a notched scroll wheel, but its five side buttons might prove contentious. You can flick the top switch up or down for two additional macros, but its close proximity to the back and forward buttons takes a bit of getting used to. It tripped me up a few times in fast paced scenarios, like fleeing lycans in Resident Evil Village, but it didn’t take me too long to adjust.

Even though my hands are on the larger side, the silver button is still a bit of a stretch for my relaxed palm grip compared to the slightly more accessible precision aim button on the G502. Rotating the mouse slightly fixes this issue, and I can’t imagine other grip styles will have much trouble, but it won’t be so easy to reach if your hands are on the smaller side. 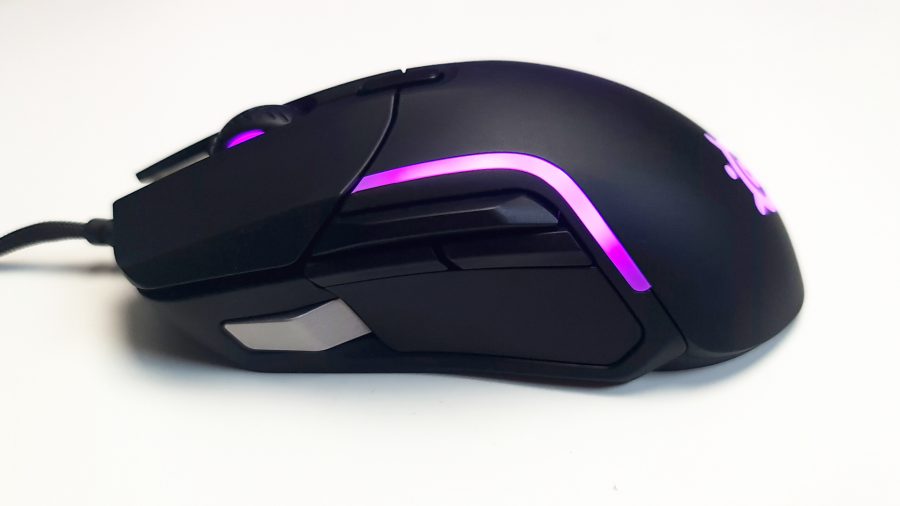 SteelSeries says the Rival 5 is modelled after a chameleon, and it’s easy to see why when it’s a veritable jack of all trades. It’s not going to beat genre-specific rodents at their jobs – the Razer Naga Trinity is still the top mouse for the best MMOs, with seven distinct side buttons, for example – but if you play a variety of games, the Rival 5 is one of the best all-rounders wrapped in an attractive $59.99 / £59.99 MSRP.

In fact, the Rival 5 is so good it’s replaced the G502 Lightspeed as my daily driver, despite never having to plug in the latter thanks to Logitech’s Powerplay charging mat – there’s a reason it tops our best wireless gaming mouse list. I miss the free-spinning scroll wheel and being cordless, but I hit my shots better now that I’m no longer held hostage by its weight.

I firmly believe that there’s no such thing as an endgame with mice as new features crop up all the time, and there’s room for improvement in better on-board storage and a closer thumb button. That said, the SteelSeries Rival 5 is the closest thing I’ve held to my perfect gaming mouse – it’s comfortable, the extra side buttons are great for customisability, and as far as I’m concerned the RGB lighting is unrivalled.

It's a fantastic gaming mouse for pretty much any situation, and a stellar lightweight alternative to the fan favourite Logitech G502. It might not suit those with smaller hands, but almost everything the Rival 5 does, it does well.