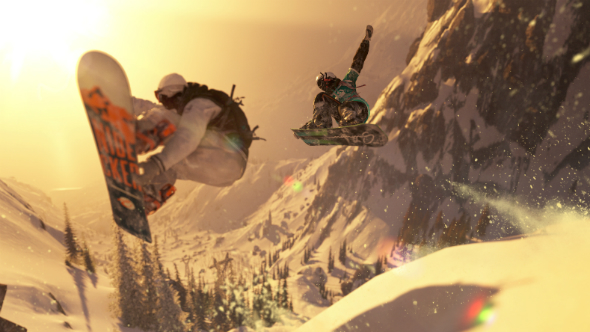 There’s been a gap in the PC market for extreme sports games for quite a while now, and Ubisoft Annecy’s Steep isn’t about to bring that wait to an end. It’s got Red Bull and GoPro sponsorships all over it, features wingsuiting, tricks and impossible jumps – but it’s not an extreme sports game, it’s a mountain exploration game.

For more high-octane thrills, check out the best racing games on PC.

Or at least that’s how I played it. I was fulfilling one of six intended styles of play, that of the explorer. Everything I did in my three hours with the game ended up coming back to exploration, purely because of the choices I made: veering off race courses halfway down to scout out a foreboding peak in the distance, opting for the most treacherous paths to see if they were even navigable. It doesn’t stop you from competing in high-score events, races or wipeout challenges, nor does it mean you’re worse equipped for them because of some asinine RPG system – it all comes down to your natural style of play.

Steep’s open world is as bare and lean as they come. There are no cities or towns beckoning you with their lights, no busy settlements or unusual NPCs to stumble across. Every inch of the map replicates some facet of the real Alps, and much like in the real world, not every slope or run is user-friendly. Overshoot an unfamiliar precipice and you’re at the mercy of the mountain, and while that might mean running into pristine, powdery snow, it could also reduce you to a flailing ragdoll at the behest of a jagged ridge, dense forest or array of avalanche barriers. 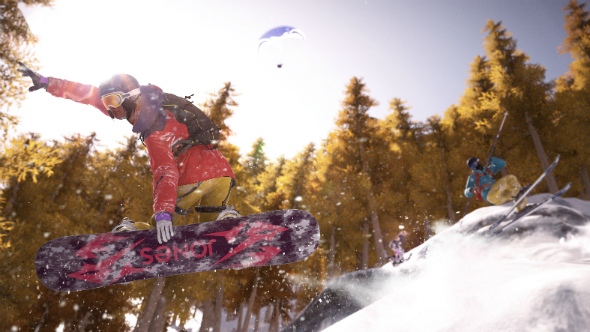 Upon picking yourself up – the penalty for those excursions is less severe than in real life – you can survey your surroundings through a set of binoculars, always able to spot potential Drop Zones, challenges and runs within easy travelling distance of wherever you happen to land. While getting to any specific spot can be testing and time-consuming, every major descent has its own dedicated Drop Zone that you can fast travel to upon discovering it. Once you’ve discovered a few, you’ll have free and instantaneous roam of an enormous area.

Couple that with the ability to respawn at any point of a previous run and Steep’s formidable open-world quickly becomes a canvas for explorative creativity. Remember spotting a potential ramp but not wanting to risk hurtling over it? Within seconds of completing your current run, you’ll be able to plonk yourself back in front of it to find out where that path could of taken you.

Refreshingly, few pieces of the mountain feel like they’ve been shaped for the player. Escape the more curated areas of Steep’s tutorial and you’ll find no naturally-occurring half-pipes or mega ramps. In its more extreme locales making a run work for you means submitting entirely to the needs of the terrain. Not everything in Steep can be conquered at pace, nor are backflips and pirouettes welcome on most routes – failing to treat the terrain with respect renders much of the mountain unplayable.

Steep succeeds where many sports games fail by making a graceful and measured descent more satisfying than a bombastic run of tricks. Ubisoft Annecy have managed to capture some semblance of what makes board sports so compelling: a sense that you’re walking a tightrope between poise and calamity, and even a slight shift in balance could send you sprawling. I say semblance because it’s actually pretty difficult to lose control, but the game gives you visual and haptic feedback for every sloppy move you make, as well as significantly slowing you down, meaning that only flawless runs feel like accomplishments. 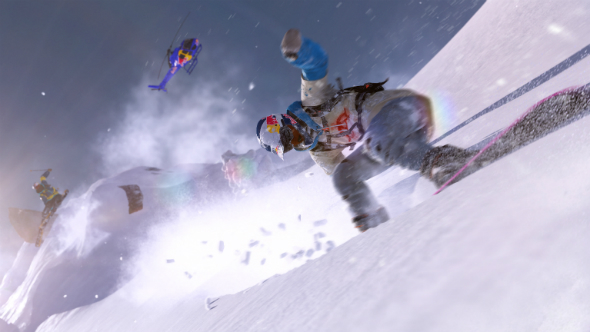 In terms of gameplay, there really aren’t many comparisons for PC gamers. “From a treatment perspective we want the game to feel authentic,” explains creative director Igor Manceau, “but that doesn’t necessarily mean we want it to feel like a simulation. In terms of gameplay references, Journey was a big inspiration for us in terms of getting that gliding experience, and also in terms of exploration, for example if you’re on top of Mont Blanc and you’re riding really well you’ll get some music and the sun.

“From a trick perspective, we’re closer to Skate than we are to SSX, both in terms of the philosophy of mapping the controls, but also for depth. There’s a twist though, because Skate is really deep in its level of control. We have tried to be as deep as possible, but we want it to be accessible also, so if you release a spin or trick when you are in the air you will land correctly.”

Features like this make Steep surprisingly open to interpretation. There’s something for everyone on the mountain range, from perfectionists trying to master a particular run and eek every last point out of it, to those like me who just want to see everything the open-world has to offer in as seamless a journey as possible. Even the reckless are catered for, with a number of challenges revolving entirely around wiping out in as spectacular and damaging a way as possible – something made easier with the help of an insta-ragdoll key.

Like many of Ubisoft’s open-world games Steep is littered with things to do, but it doesn’t feel tacked on as part of a final attempt to wring as many hours out of the game as possible. Again, we have the mountain range to thank for that. “Right from when we first had rideable terrain we started to create challenges for ourselves,” says Manceau, “but what was important was to create enough variety in terms of gameplay that you can access through the terrain itself. From a production perspective, and I’ll say a creative one too, we wanted to put our energy and money into creating value gameplay at the core. So yes we have lots of challenges, but I still discover some lines in the game after hundreds of hours. That’s just the Alps.”

The sheer size of the map, and various means of travel ensure that set challenges are always nearby, but that anyone simply wishing to create their own moments can do so without having to dodge waypoints. This comes into its own during online sessions, where by setting your own waypoints and using the infinitely versatile replay system, you can create your own runs on the fly in a matter of seconds. Once you’ve got your crew assembled you’ll also have access to everyone’s replays, including their head-mounted GoPro camera, making time spent tinkering with replays all too easy to lose track of.

Unlike a lot of extreme sports games, Steep doesn’t immediately grab you. Performing tricks, recovering from mistakes and learning how to finesse your movement is a sizable learning curve, and the game’s systems only start to make sense when you emerge on the other side of that curve. Steep isn’t strictly an extreme sports game, it’s about the art of motion and making the unconquerable conquerable – both concepts that are visually imperceptible, but are conveyed through gameplay with a startling potency.

Reckon you’ll be picking up Steep when it releases? Let us know why in the comments below.