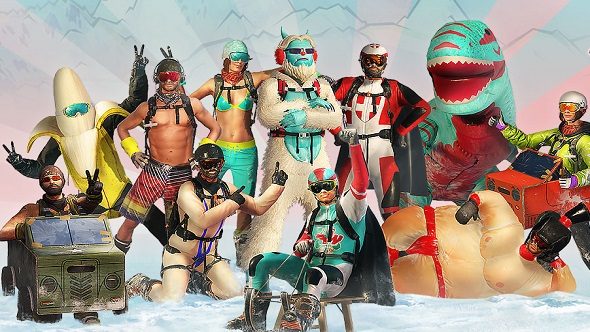 While we’ve just come out of the doldrums of winter, Steep’s upcoming Winterfest DLC hopes to tempt skiers, snowboards and now sledders back to the slopes for another season. Adding in a sled as an extra way to explore its open world, Steep’s latest DLC also adds 21 new challenges and 10 new costumes to the mix.

Centred round the titular Winterfest, the costumes coming in this DLC ranging from a giant banana costume, one of those inflatable T-Rex outfits, alongside an Evil Knievel esque jumpsuit and a hilarious fake mankini. If you’re really brave, you can go sledding in just your trunks. You’re asking for a one way trip to A&E, but just think of the ‘legendary’ banter.

There are additional customisation items besides these 10 costumes, with the Winterfest DLC also adding new bosses for players to face off against in select challenges. As for the sled, it can be used everywhere, just like the snowboard, skis, wingsuit and paraglider. I’m disappointed that you can’t use a tea-tray or a bin lid as a sled but hey, they may be the ultimate sleds you get for completing all of the DLC challenges.

If you have already have either the Steep season pass or Steep Gold Edition, you will gain access to the Winterfest DLC straight away on May 3. Otherwise, the Winterfest DLC is available as a standalone pack for $11.99. With Steep still being full price on Steam, I doubt we’ll see many new arrivals heading off to enjoy Winterfest.