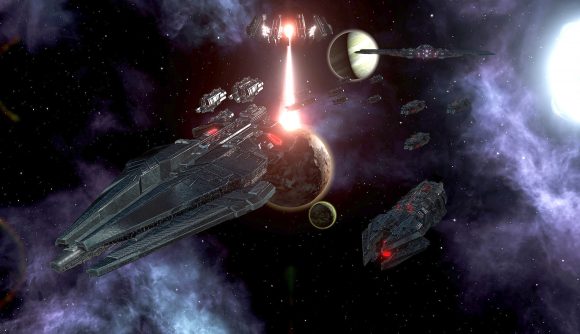 As the Stellaris development team continues working on November’s 2.3 update, the team is also highlighting more changes coming to the patch. Today’s dev diary goes through some new features and content, such as a civic that’s inspired by high fantasy elves that didn’t make it in time for the 3.1 patch. It's called 'Pompous Purists' and is for xenophobic empires who nevertheless see the value in treating with other races – so long as it's on their terms.

Back in May, the development team ran an experiment where a selection of players were treated to a new interface as part of empire creation, specifically an improved browser to see more 3D ship models within a set. The test was mainly to see if users would appreciate improvements to areas like this, and it must have been a success because that change is now rolling out to everyone in the November update.

Work has also been done to look at other more mature areas of the game to see if they can’t be spruced up a bit. More anomaly variants will be included, especially in categories where there was only one variant available. The terraforming process has also been made slightly more interesting to break up how automatic the process can feel.

Finally, not only is the AI going to be smarter with money, but it will also now engage with terraforming in a more sensible way, creating better planets and even making use of features that give boosts to terraforming.

After the November update, another new patch is expected in February. In the meantime, you can check out these excellent Stellaris mods.