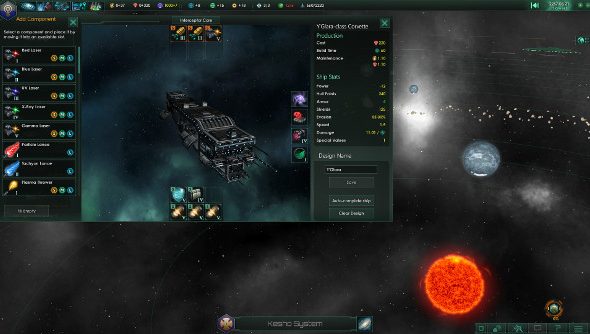 Update May 26, 2016: Clarke is now available in beta form, as are the full patch notes for the update.

Stellaris’ first major update, Clarke, is just days away from official release. Before that, Paradox have made a beta version of the patch available to everyone, through Steam’s official Beta feature. This comes with the release of the full patch notes.

Can’t wait? Try one of the best strategy games instead.

If you want access to it, navigate to the Stellaris entry in your Steam list, right click and go to properties. Hit the betas tab and select 1.1.0_beta. Stellaris should then begin downloading an update. If it doesn’t, or you can’t see that beta entry in the dropdown list, restart Steam and it should be fixed.

The full patch notes are over on the official Paradox forums. There’s significant additions from the preview highlights given out yesterday, so do have a check if you’re interested in the nitty-gritty numbers of it all, or precise bug fixes.

Original story May 25, 2016:Stellaris’ first major patch, Clarke, is just around the corner. After Paradox revealed all of their future plans last week, they’ve now laid out the highlights that Clarke will contain, including UI and AI improvements at the fore, as well as some small balance tweaks.

Paradox say they’ll be working on the Asimov patch next, which has a large focus on new features and balancing. They’ll be using their usual dev diaries to show those off in the next few weeks. For Clarke, it will enter a public beta phase before the end of the week, and hopefully be released soon after. Some more details over in the patch post on their forums.