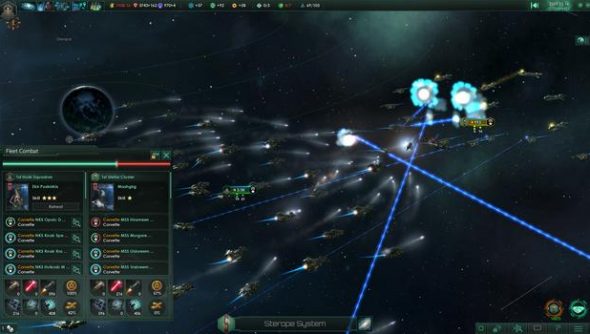 Paradox took their first tentative steps into the stars with Stellaris and it seems to have paid off already. Perhaps there’s hope for the new Call of Duty yet.

Space is cool. Don’t take my word for it, though, have a look at our list of PC’s best space games and see for yourself.

Paradox launched Stellaris yesterday and in that short time it’s enjoyed 95% positive Steam user reviews, its player count rose to 68,000 simultaneous players – higher than even Cities: Skylines has recorded – and it’s sold over 200,000 units. This latter statistic means Stellaris has broken the revenue record for Paradox titles within the same period. For Paradox’s internal development studio, the game has broken every record available and is the studio’s fastest selling game ever.

“We are immensely proud of the Paradox team for putting together such a stellar release,” said Fredrik Wester, CEO of Paradox Interactive. “This release is the result of hard work and dedication from the entire company and in particular Paradox Development Studio. The incredible reception by players, indicated for instance by the steam user reviews, is all the proof we could ask for that our hard work paid off. Our fans have put their faith in us and Stellaris will be a part of Paradox’s onwards journey for a long time to come.”

”Stellaris breaks a lot of new ground for Paradox Development Studio. It is a type of game we have never attempted to do before, and we are immensely satisfied to see this leap of faith work out well, especially with all the positive response we are getting from the players,” added Henrik Fåhraeus, Game Director of Stellaris. “We are listening very keenly to all the feedback we are getting and look forward to many years of continued expansions and improvements to the game. Let’s make space great again, together!”

It’s had a good launch, then. Some users have been complaining about stuttering issues, however, but Paradox are promising to fix these issues as soon as possible, with a solution hopefully arriving in the next day or two.

We believe we identified the cause for the stuttering issue some people are experiencing, and we intend to make an optional beta patch soon.