Stellaris’s next update is version 1.5, also called ‘Banks’, and today we learned about a new feature that will be added. They’re called traditions, they’re designed to add role-playing flavour to your empire and to encourage tall, peaceful play. At a glance, they remind me of Civilization V’s social policies.

Not played Stellaris? It’s one of the best strategy games on PC.

The news comes via a development diary on the Paradox forums by Martin ‘Wiz’ Anward, the Stellaris game director. Anward hopes the system will enable players to further customise their empires and to role-play empires with different values and priorities. “We have also talked about our desire to allow for the existence of ‘tall’ empires”, says Anward.

Traditions will accomplish this by adding seven different trees which reflect different sets of values, and a resource called ‘Unity’ that is spent to unlock them. The cost of unlocking a tradition will depend on the size of your empire, as well as its internal stability.

“Unhappy factions, minority species and slaves all increase the cost of adopting traditions,” says Anward, “though these effects can be offset”. Generally, small, peaceful empires (playing ‘tall’, in strategy parlance) will unlock traditions faster than large, expansionist ones (playing ‘wide’).

Unity is mainly earned through government buildings, such as mausoleums, monuments and temples. You’ll spend it unlocking tradition trees, and then on individual traditions. Each tree has a starter bonus, five unlockable traditions and a finisher bonus that is applied when you’ve completed the tree, much like Civ 5’s social policy trees.

The seven trees are as follows: 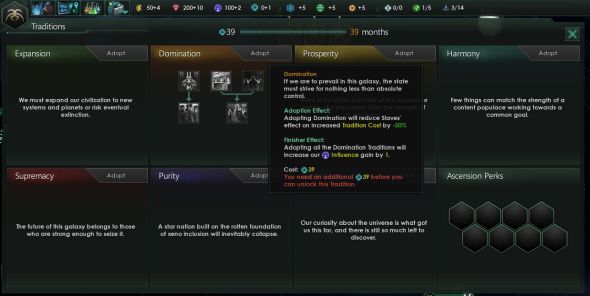 Note the ‘Ascension Perks’ section of that image above. Anward doesn’t discuss this, but teases more information in the next diary. Speaking of which, the Banks update doesn’t have a release date yet, but Anward says “we have quite a few dev diaries to go through before we get there”, hinting that it’s quite a way off.