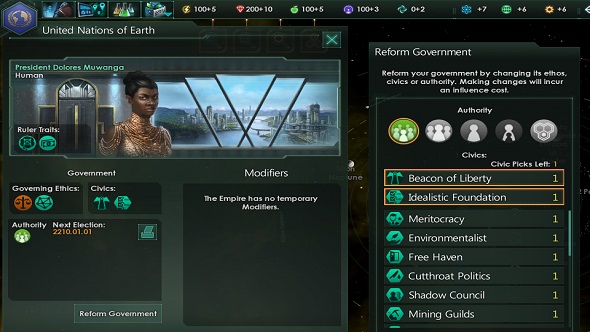 Continuing their drip feed of information about the new features present in their Utopia expansion, Paradox have revealed some of the changes that are coming to Stellaris’ political systems. While the thrust of the Utopia expansion and the free Banks update is mainly to do with empire customization and ethics, it would seem odd if government reform was not included in these sweeping changes. If only government reform were so easy in real life.

If you’re one for simulating governments, try these other 4X games.

The government rework will be available to all Stellaris players, with players now being able to create their own government rather than picking from a preconfigured list. You first off start with your Authority, which determines how the transition of power is handled. You can choose democratic rule where power is transferred every 10 years, an oligarchy where a new ruler is elected every 40 or 50 years, a dictatorship where power only changes hands upon a ruler’s death or an imperial system, where rulers rule for life and power is then passed down the bloodline.

For all the systems that involve the populace electing their leader, you need to take into account the separate political factions that are present in each empire. If you’re supposed to be running an inclusive democracy, picking an authoritarian human supremacist for leader may cause some problems. You also have to consider Civics, which gives specific bonuses and should tie into the ethics of your empire. You start off with two Civics slot, with a third being unlocked via additional research. The Civics range from things like environmentalism, mandatory military service, open borders and so on. If you (or an armed populace) decide that the current government direction is not helping society, you can reform your government to change your Authority and Civics slot.

If you buy the Utopia expansion, would be political reformers gain access to certain advanced Civics and a special Authority. The new Civics can turn your empire into the Imperium of Man from Warhammer 40k, violently purging any other alien races and vastly boosting your military output. You can be an entirely mechanised society, where you start off with robot workers or you can be a society where you have another species as a dedicated underclass, used mainly as either cannon fodder or slave workers.

You can also have your empire be a psychically linked hive mind, where there is no need for internal politics as everyone obeys without question. The main downside with creating your own Borg civilization is that you can only assimilate other empires if you have advanced gene splicing technology. Otherwise, any conquered species will eventually die out as they are used to feed the hive mind. You can still perform diplomacy if you want to be a peaceful empire of collective consciousnesses, but non hive mind empires will initially distrust you.

Speaking of conquering species, you can now indoctrinate more primitive species before taking them over. This essentially involves feeding a planet propaganda until they start to line up with your empire’s ethics, where you can then march in and take over as the conquering heroes. This can also backfire, as the new Unrest stat means that citizens can resist certain policies and even stage an armed revolt if they are unhappy enough. Your efforts to make Ziltron-4 great again may end up with people staging a mass uprising.