So, you want to know more about the Stellaris tech tree? The idea of ‘tech trees’ is no stranger to space 4X games like Stellaris, but Paradox’s vision for the concept is slightly more unusual. Instead of a static, known web of potential technologies like most strategy games, Stellaris adds an element of randomness.

Stellaris’ technology interface is split into three sections, one for each of the core disciplines of Engineering, Physics, and Society. You start off with three randomly pulled techs for each area, with built-in biases as to what techs you are shown. Every time you research a tech a new one is chosen at random, again, following certain biases. If you ever discover or unlock something via an event, it will also show up in this interface and stick there until you research it.

This ‘card shuffle’ façade introduces a touch of the unknown to any individual run – you’re never quite sure what techs will unlock in which order, although like a traditionally tree different techs are strung along a path which you’ll need to follow towards the end. This means that, despite not being able to control what tech you get at any given point, you can still plan for your end goals.

If you want to get an idea as to what the complete Stellaris tech tree looks like, you’ll want to start with this tool. It was created by user Turanar, and is being kept up to date as Stellaris evolves. The current version is 3.0.1, although you can go here to see archived copies of previous versions of the tool going back to 2.2.0. 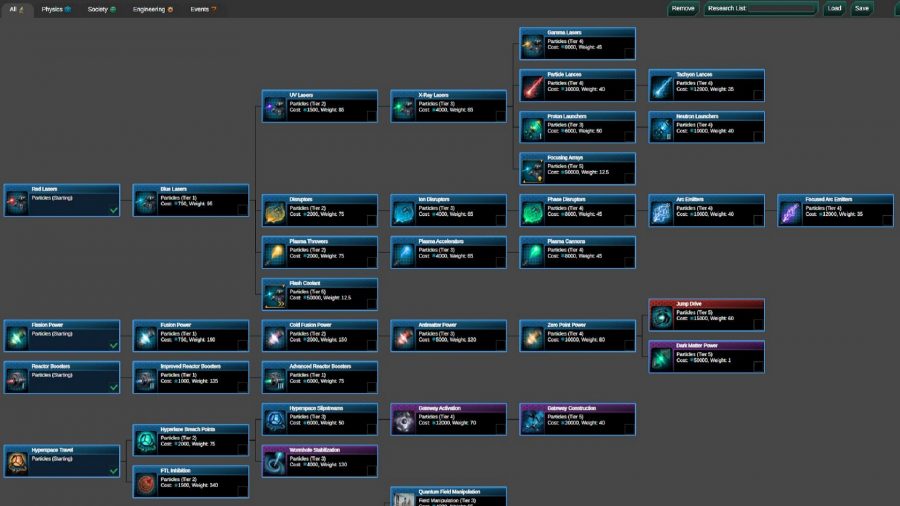 The tool will show you the paths across the tech tree’s various disciplines and sub-categories, as well as what each individual tech nets you in terms of benefits. You can also track your progress through the tree by ticking a checkbox in the corner of each tech entry. Checking that box will then show you what additional techs it unlocks.

Following a collaboration with another fan, the tool can now also be used to create, save, and then load various lists so you can track your progress across multiple games. Saves are stored in your browser’s storage, so data will be local to whichever browser you’re using on a specific machine.

Using this tool will at least allow you to ‘scout’ out the path ahead of you, and note which techs you need to follow in order to achieve any late-game goals. If you don’t fancy using a third-party tool, there is a handy Stellaris mod that integrates it into the game. 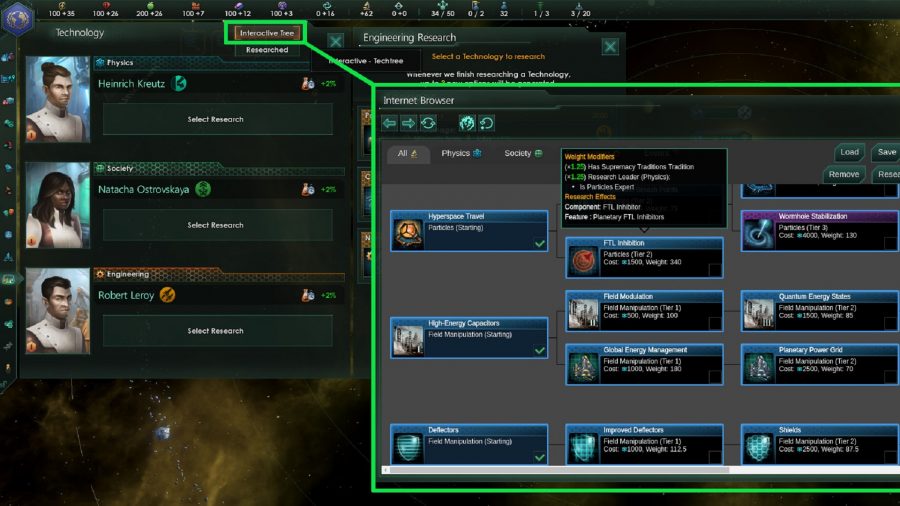 It wasn’t created by Turanar, and it hasn’t been updated for 2.8. Some claim it still works in 3.0, although it’s potentially not accurate given changes to the tech tree that came about from the ‘Dick’ patch and the recently released Nemesis expansion.

If you want to know about the technology system in general, especially how it weights various techs in terms of what options the player is presented, we recommend checking out the official Stellaris wiki.