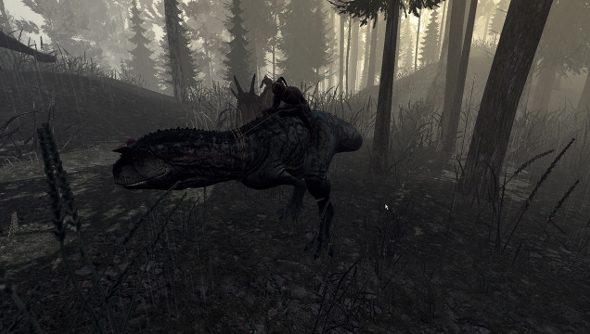 There’s not much stomping being going on in The Stomping Land lately. Indeed, backers and Early Access players had been left wondering if the game had simply been abandoned, as updates and any form of communication suddenly stopped.

It appears that there’s still life in the game yet, and is transitioning to Unreal engine 4. Developer Alex Fundora made a statement to Kotaku, explaining the situation.

“It has been quiet in The Stomping Land community but that is certainly not the case behind the scenes! The game is being moved to Unreal Engine 4 to take advantage of technical and creative opportunities, and while the game was so early in development, I didn’t want to keep working for years with a game engine (UDK) that had officially lost support by Epic,” said Fundora. “The move has put a bit of more work on my plate, but the already discovered opportunities using UE4 are exciting, and I’m confident fans will be satisfied with the long-run decision.”

So it’s not so much an explanation for why there’s been no updates or communication with backers or players, rather it’s a brief update made to a press outlet rather than the community. Both the Twitter account and Facebook page remain essentially dead, there’s no update on the Kickstarter page or Steam.

This lack of communication with players really makes backing the project and jumping into Early Access worth nothing to them. Without that transparency, this becomes nothing more than a premium alpha where testers have to pay for the privilege to face bugs.

Being part of the development, watching it grow and getting an opportunity to see what the developers are doing is the entire point; it’s what people spend money on. They are not getting that in The Stomping Land.