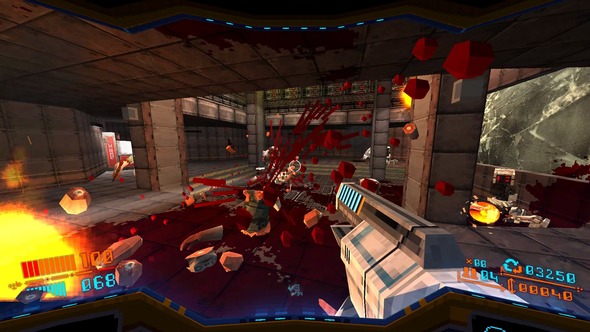 Pixel Titans co-founder Thom Glunt had been playing a lot of ‘90s shooters – Doom, Doom II, Quake – and also a lot of Spelunky. It was during that phase, back in 2014, that the idea came to him: a procedural roguelike with the best mechanics from yesteryear’s FPS games would be pretty cool, wouldn’t it?

A deep dive into retro shooters and roguelikes at the time revealed a crossover gap that had yet to be explored, and in this manner Strafe was born.

Two years and 4,953 backers later, it’s nearing completion. But along the way it tapped into something powerful with its publicity campaign – including that face-melting trailer – which coincides with a narrowing focus on ‘90s nostalgia in wider pop culture. It begs the question: when Strafe releases, will it be enough that it succeeds in its goal of blending Doom with Spelunky? Or has the game’s muscular marketing ignited an impossible but irresistible fantasy – a throwback ‘90s game that perfectly lampoons the era’s tropes while actually matching its best output for outright quality?

There’s certainly nothing underwhelming about Strafe as a gameplay experience isolated from its promotional materials. Your 11-year-old self wished there was this much gore in FPS games of the 90s – it covers rooms top to bottom, dripping slowly down walls, pooling on floors and even, I’m told, putting out fires. It’s a nod to previous excesses within the genre, but also a bona fide game mechanic, providing an antidote to the acid that certain enemies spew over Strafe’s Quake-era corridor textures. Crowd control was always a fundamental of id shooters, but it’s a particularly involving task in Strafe where bodily fluids can have such a profound effect on your environment. And specifically which bits of it are safe to tread on.

Enemy behaviour and weapon feedback feel dialled up just as deliriously, as if you’re already playing the ‘extreme Strafe’ mod. Foes lollop towards you, propelled by physics modelling that in truth is probably light years beyond Pixel Titans’ source material, gathering as you collect their attention and forming mobs that quickly become jam when you start treating them to some LMB. Although you begin the game with a choice of just three weapons – shotgun, machine gun or railgun – they’re all capable of making a huge mess in just a few clicks, and can all be morphed and molded into more powerful incarnations via upgrade stations. 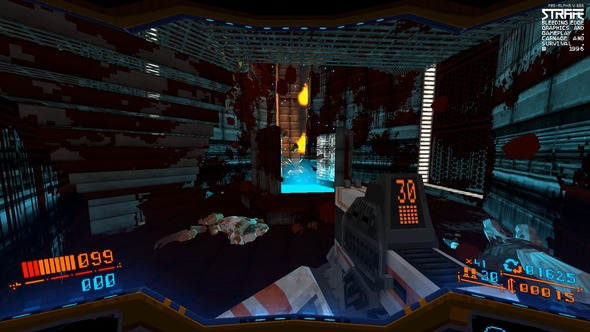 Where Pixel Titans’ shooter differs from the id school of thought is in its procedural and roguelike elements. Though levels are curated to a degree, they’re not laid out brick-by-brick. Neither are their layouts left entirely up to chance/clever algorithms, though. Instead there are certain constants in each zone – the starting room and several other corridors and open spaces that define a level’s character – and a number of variables attached to them. There’s a room in the first level of zone 1 whose floor is seeping with neon green gunge and will always spawn a door to the next area where a keycard lies, for example, but that door might appear in any number of locations. Semi-procedural design that Carmack, Romero et al would have absolutely lost their sh*t over 20 years ago.

As a frequent visitor back to shooters of yore, I was quietly confident about my performance in Strafe. Quietly, incorrectly, confident. Even if you’ve played something with the lightning-quick movement speed of Quake III Arena lately, there’s still an adjustment process that you go through, gradually acclimatising again with the sheer pace of everything happening on screen. Ten minutes later, you’re circle-strafing and shooting heads off at a full sprint, wondering why the FPS has become so lumbering in the intervening twenty years. 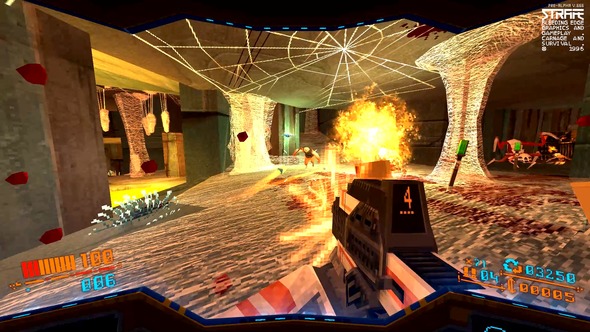 The effect your movement speed has on gameplay is less about sharpening your reaction times though, and more about remembering how much faster you are than your opponents and then using it to your advantage. It’s deeply possible to simply run away from big mobs of monsters, which might solve your problems in the immediate short term but also opens the door to the possibility of a) an even bigger mob of monsters amassing, b) some of those monsters being allowed to spray acid everywhere unhindered, and c) having to travel back into that fearsome mob to progress.

Strafe, like fondly remembered UK adventure gameshow The Crystal Maze, is divided into zones, each with a distinct colour palette, art direction, and – veering away from the Crystal Maze simile now – new enemies with different behavioural patterns and attacks. While zone 1 plays it relatively safe with space station mise en scène in order to ground you at least somewhat in its story (you’re on a space station in which bad things have happened), zone 2 veers into more organic environments and a striking upturn in both enemy variety and aggression. Whether intentionally or not, it harks back to the days when seeing a new area of a game came with a genuine sense of achievement, because you battled with ruthless opposition from the game designer to get that far. 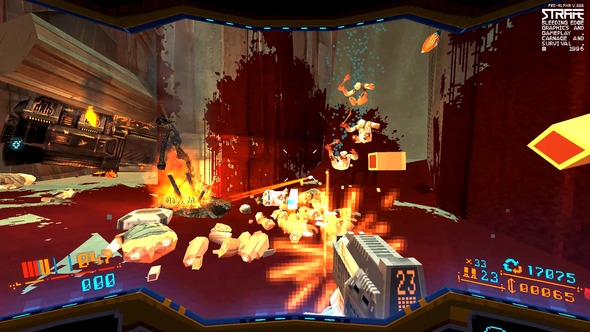 However, as for whether Strafe actually plays like Doom, or Quake, or even Shogo: Mobile Armor Division: it doesn’t. You wouldn’t for one second mistake this for a title actually released twenty years ago. Nor are Pixel Titans pretending otherwise. They know as well as you that corridor shooters were endlessly, impossibly curated things in the ‘90s, every health pack and monster closet placed just so after thousands of playthroughs. Strafe is something different, and simply hopes to capture the mechanical enjoyment of the movement and weapon feedback from that era.

And yet it’s hard not to want it to be more of a time machine. Perhaps that’s down to the live action trailer, a testament to Glunt’s experience as a director working with music videos. The larger-than-life, toy commercial ‘90s that we’re invited into for a few minutes during that short are a beguiling place, and on an irrational level you want Strafe to be a means of spending more time in that place. The fact that it isn’t, that it has its eye on ‘00s indie development just as much as id Software’s output, isn’t explicitly a problem. But it means the intelligent design and successful cross-pollination of shooter and roguelike of Strafe are in danger of being overshadowed by our growing appetite for nostalgia porn.

Strafe releases on March 28. Excited about it? Let us know below.