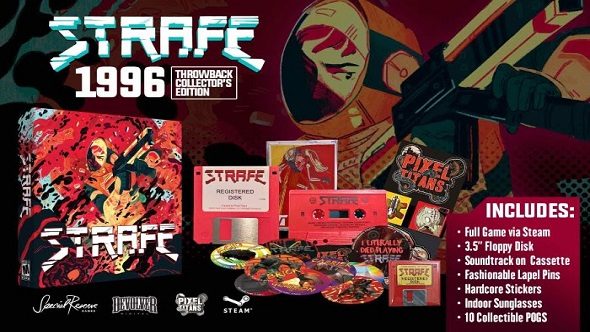 Pogs. The word tubular. Floppy disks. Acid washed jeans. These are things we all hope had been left buried in the 1990s, never to be seen again. However, in their quest to make one of the most ‘90s games imaginable, Devolver Digital have released details on Strafe’s special editions which contain such amazing items as special Strafe-themed pogs.

If you’re looking for your shooter fix, look no further than our list of the PC’s best.

Releasing on May 9, the Throwback collector’s edition for Strafe is designed by Special Reserve Games and contains the base game on a special commemorative floppy disk, the game’s soundtrack on cassette, ten Strafe pogs, indoor sunglasses, ‘hardcore’ stickers and a fashionable lapel pin.

For audiophile Strafe fans, Laced Recordsare releasing a two-disc vinyl record set for Pixel Titans’ shooter, which can be bundled with a digital copy of the actual game. This vinyl comes in two versions: a standard edition and a special edition, with only 300 special editions being printed and put on sale.

Anyone who pre-orders either the Steam or physical editions of Strafe will also gain access to the special VV-1N weapon which, according to Devolver, will “change the face of exclusive in-game preorder bonuses forever.” Devolver have releasedthe abovetrailer for the weapon which helpfully stops just as it is about fire.

Based on the like to dislike ratio on said trailer, Strafe fans aren’t responding well with the idea that a gun may be hidden behind a paywall. However, I think they may have missed the joke as the VV-1N is designed to be a literal pay to win weapon. Its name even spells out the word win. Based on Pixel Titans’ tongue-in-cheek approach to the entire development and market of Strafe, the VV-1N may actually just complete the game for you once fired.