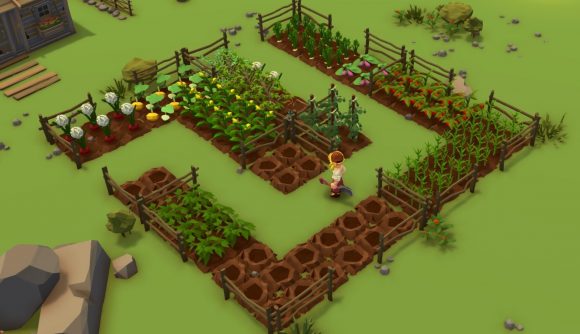 When I think of pirates I imagine the clashing of swords, the hustle for booty, and stormy seas crashing against rickety ships. But Lemonbomb Entertainment has made me feel like I’ve been pretty harsh on seafaring folk. The studio is releasing an adventure game called Stranded Sails where you play as a pirate with a passion for farming, exploring, and gardening – it’s adorable.

In Stranded Sails: Explorers of the Cursed Islands you play as a pirate who has been shipwrecked on a beautiful archipelago with your crew. You are tasked with farming the land, exploring the island, and building a camp for you and your fellow survivors.

Stranded Sails is very different from the likes from Stardew Valley, My Time at Portia, and Harvest Moon in that you actually have an end goal. You need to build a sturdy ship with your supplies and leave the island, returning home with your crew.

Building a vessel for the whole crew will take some time so until then you’ll need to construct and maintain a camp. As the son or daughter of the ship’s captain, you need to take the initiative and start fishing, crafting, and cooking for your fellow survivors. In return for your efforts, they will look after your farmstead when you go off adventuring.

Stranded Sails also has story-driven quests that encourage you to explore the dangerous depths of the island. Using a little row-boat, you can access the strange other parts of the archipelago to gain access to better resources and materials.

However, it’s not all sunshine and fruit punch. There are spooky ghosts and ghoulies that lie beneath the sunny, tropical surface and you will need to battle them to find out more about the island’s mysteries.

If Stranded Sails has ticked all your relaxing, farming sim boxes then make sure to support the developers by wishlisting the game over on Steam and following the game on Twitter to keep an eye on when an official release date is announced. If it’s swashbuckling you’re looking for, check out our list of the best pirate games on PC.