Where once there was only Left 4 Dead for competition, Rebellion’s Strange Brigade is a co-op horde shooter launching in the same year as Vermintide 2, Earthfall, and Hunt: Showdown. Rebellion’s game does stand out, however, in part through its setting: a pulpy action adventure set in the unearthed tombs of 1930s Egypt. It also adds to the proven formula a number of puzzling minigames and a full story campaign – which starts with an ancient evil unleashed by a bumbling amateur archaeologist, naturally. How gloriously kitsch.

Strange Brigade’s August 28 release date is fast approaching. With that in mind, we got ahead of the crowd and got to play a hefty portion of the game’s campaign alongside speaking to studio design director Ben Fisher.

He talks with us about the studio’s need to separate Strange Brigade game from the crowd and how the team went about capturing the essentials of an adventure story from the ‘30s. It’s not as simple as watching a lot of Indiana Jones films, and actually fits in with Rebellion’s publishing arm and its connections to Judge Dredd comic book company 2000AD.

PCGN: What inspired the choice for cheesy 1930s pulp style?

Ben Fisher: Rebellion games tend to have that high-energy pulpy tone – along with 2000AD and Solaris and Abaddon books – there’s that sort of that accessible palpable energy to everything. As we developed Strange Brigade, it became obvious that that ‘30s serial tone with that British pithy voiceover was a one that no one had really explored. Once we started along that road it seemed like a really natural way to keep going. You get to punch a mummy in the face, what’s not to love? 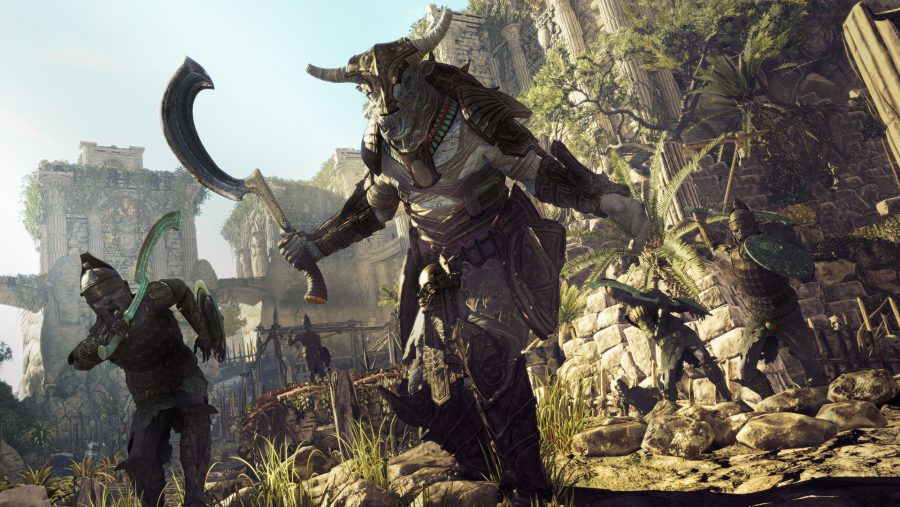 Is it hard to stand out from other horde shooters?

I think there’s two things that we’re aiming to do which should help in that regard. One is the mildly slapstick, tongue-in-cheek tone to the game. It’s funny, it’s lighthearted, there’s all the crazy traps and those sorts of things. But we’ve also made sure that the exploration and puzzle solving is part of the main game, as well as a strong story.

We got to play Strange Brigade and found that its tongue-in-cheek dialogue and extra game modes prove it isn't just Left 4 Dead with mummies.

We also have a full-sized campaign. Something like Left 4 Dead has a sort-of campaign, but it’s more focused on aggressively replaying levels. We wanted to make sure there was a story that you could play single-player if you wanted to. So there’s a breadth of tone that hopefully means its accessible to a wider range of people.

There’s also horde mode, which we wanted to provide a baseline of what the audience expects with this kind of mode. Waves of bad guys threatening you, attempting to overwhelm you, and you unlock new weapons and areas with the gold that you collect as you play. The tone, the traps, and the environment, and the magical abilities that you have are what makes it different from similar experiences.

Finally, score attack let us really focus on what we think is one of the coolest moments of the core gameplay experience, and that’s where there’s a load of bad guys, a load of traps and explosive barrels, and you’ve got super-powered weapons that do loads of damage. 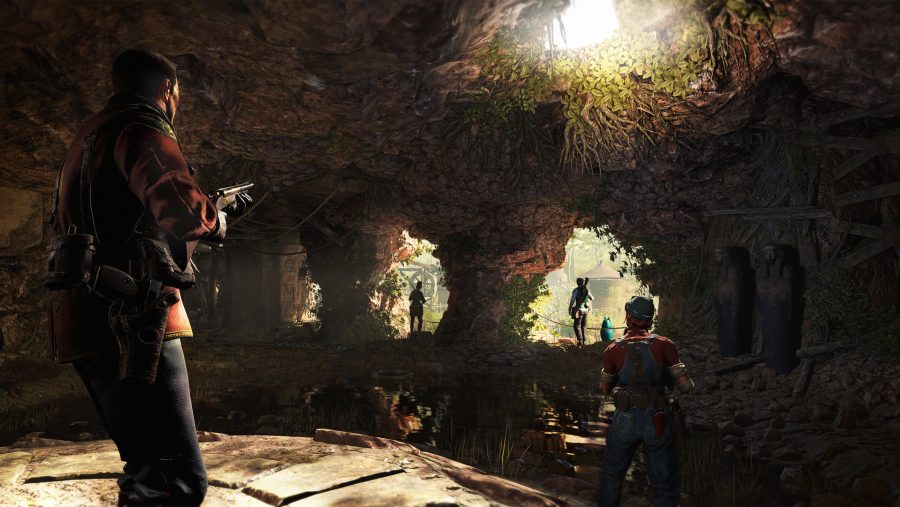 If you manage to choose exactly the right moment, you can control a situation really easily – given that those moments felt so cool in the campaign, it felt right to build a whole mode around that tone. We find that players die a couple of times on their first few tries, but you quickly start figuring it out, like a solution to a puzzle almost – and when it goes right you can get some really high scores.

Is it challenging to engage a group of players with the story? It’s easy for people to talk over cutscenes and miss things…

So the way that we’ve approached that is the cutscenes during the level are typically quite short, and a lot of the story comes from collectable story sections, and from the scene setting at the very start before the level loads.

It also means that you can focus purely on the atmosphere and the tone. When you’ve got a group of players it does work well if you want to do a straight run and focus on killing stuff. But for those players who want to take more time and find those more complicated puzzles, they tend to invest more in the environment as they find it. There’s lots to uncover.

The game tells a story, but it doesn’t ram it in your face. It’s a balancing act. There’s a lot of objective guidance, and making sure the next problem you have to solve is quite close ahead. But if you want to run ahead and shoot skeletons and mummies, that’s absolutely fine.

That must make its own challenge, how do you account for things like the pace of jokes when different groups of players are advancing through levels at different rates?

It was actually a real balancing act, and in fact what we had to do was wait until all of the content was in place before we started putting in the voice lines, so we could fine tune exactly what lines trigger where and how frequently. It was one of the last things that got finalised. We knew the story of each mission, but all the snappy jokes came last.

You can play as a real spread of characters, how did they come together?

Well the Strange Brigade itself are members of the ‘Department of Antiquities’ – they’re a team of worldwide adventurers, and we wanted to have that 1930s post-war tone.

So I guess wherever possible we wanted to use things that are accessible as archetypes but not typically seen, so that they’re unique and memorable characters. There are four at launch, and four coming as part of the season pass. We developed a full suite of characters and launched with the ones that seemed to be the most charismatic and fit the story that we were trying to tell the best.

We aimed to find voice actors that were from the same region as the character that they represent, and we searched for a long time to find voices that matched the region that we thought suited the character, so there was a little bit of back and forth between character backstories and available voice actors. It took a little while to find the sweet spot, but I think we’ve ended up in quite a nice place. If someone’s putting on a voice, they can often sound like they’re putting on a voice, so we didn’t want to do that. 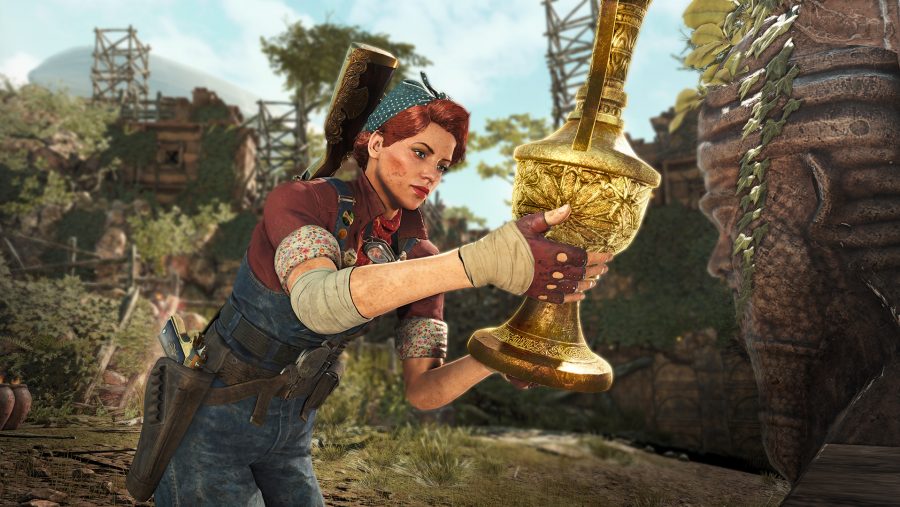 So the season pass – how is the content split up there?

The season pass comes with additional characters, an additional mini-story campaign, and additional weapons – there’s also free content coming for all players over the next few months . If you look at something like Sniper Elite it’s a good indicator of the size of content that we’re looking to support here.

The visual customisation is just part of the season pass as an additional set of skins for the characters. The customisation that’s available in the base game is the weapons you choose in your loadout, upgrades for those weapons – gems that you find that allow you to upgrade the bullets with certain properties – and you unlock different magical amulets for each of the characters, so its about customising tactically rather than physically.

The player can choose whichever primary weapon sidearm and grenade that they want, but we’ve set up a default loadout that we thought fit well with the starting amulet of each of the characters.