Hello, I’m Joe and I’m your friendly neighbourhood strategy editor. One of the great things about being in charge of an entire genre’s worth of content is that I get to reflect on the year in videogames through a very specific lens. Who cares about Cyberpunk or Hades – have you heard about what happened in strategy gaming this year?

It’s a genre that’s getting more mainstream as time passes, though it still has to struggle against perceptions of being niche, against passionate legacy communities who can’t agree on what they want, and against various trends that arise within the industry which either aren’t compatible with the genre, or distract developers as they try to capture some of the lucrative magic seen elsewhere.

But by and large, things are good and are only getting better for strategy gaming. While the global pandemic has affected our corner of gaming as well, there was still plenty to highlight this year and the highs of 2020 represent some of the best strategy games have to offer.

Join me on a tour as we recap the best of strategy gaming in 2020. 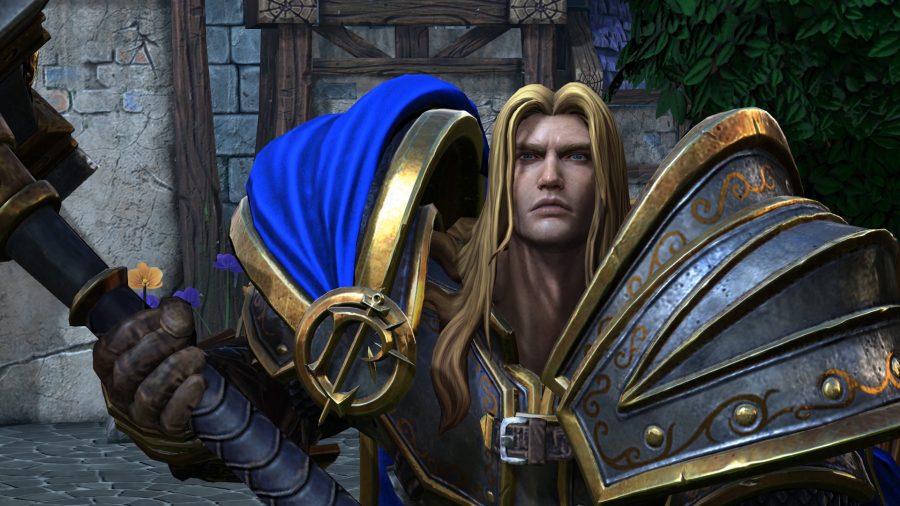 Given that just last year Microsoft made the galaxy brain decision to remaster Age of Empires II again, possibly for the bants, we went into 2020 with remaster projects, remakes, and definitely definitive editions on the mind.

Things did not get off to a great start. Warcraft III: Reforged was a major talking point for the first half of the year. Really, the sin of Warcraft III was not that it was a bad remaster, but that it failed to manage its own expectations – it did a perfectly adequate job in making a very old game look and play well in the modern era. The consternation came from confusion about how far this would go – notably over in-game cutscenes – as well as some nasty surprises for which the community were not, to quote Illidan Stormrage, prepared. Like blocking players from choosing between the old and new version of the game and sly changes to the EULA for user-generated content.

Such controversies overshadowed the fact that as a remaster of a game, it wasn’t the worst release of 2020. Not by a long shot. But the less said about Kalypso Media’s re-release double whammy of Commandos 2 HD and Praetorians HD, the better. 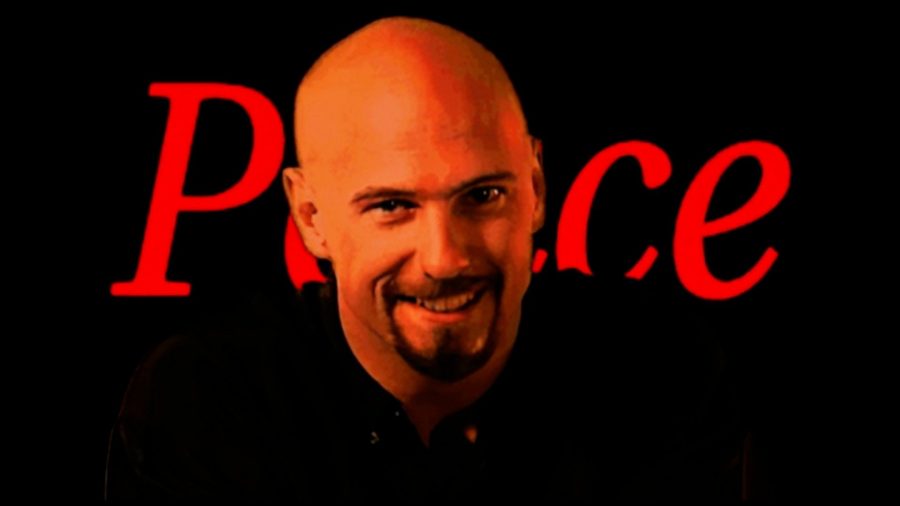 Then the Command & Conquer: Remastered Collection came along in June to show everyone how it’s really done. Featuring new (but comfortingly familiar) graphics, bonus content, and a ‘two-for-one’ package that represented pretty decent value for money, it dripped with appropriate reverence for a true classic. The devs even topped it all off by releasing the SDK and making sure modding support was built in, so the community had plenty to work with as official support slowed after launch.

Bonus round: end of an era

Speaking of RTS games, Blizzard Entertainment announced in mid-October that it would no longer produce new content for Starcraft II, ten years after it was first released. Blizzard is working on Diablo IV, of course, but what’s next in terms of its strategy franchises remains uncertain.

Starcraft II is a landmark in RTS design and played an integral role in the rise of esports and the MOBA genre. Not a great year for Blizzard’s strategy roster, then. 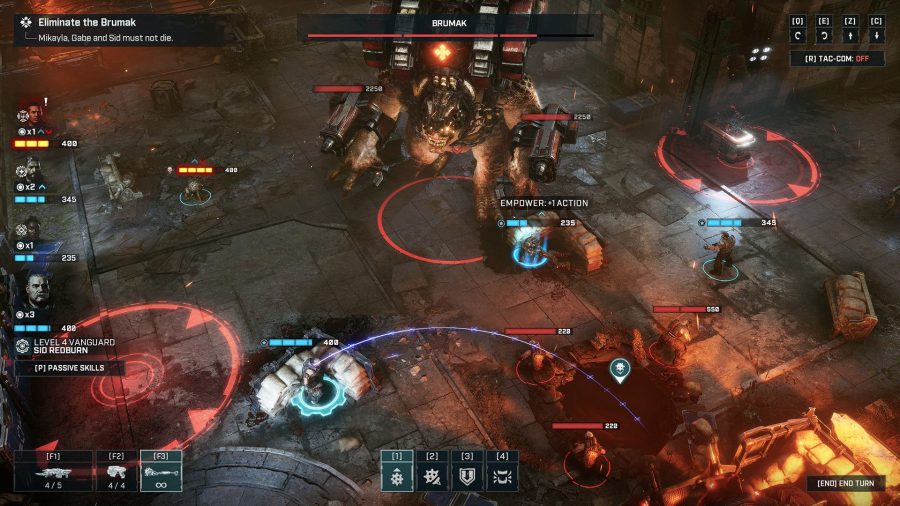 Heir to the throne – XCOM edition

XCOM and XCOM 2 continue to represent gold standards in tactical turn-based strategy games. The modernisation of Julian Gollop’s sci-fi classic is perhaps the greatest example of how to conduct a reimagining for a new audience, and while XCOM 2 took a while to really settle into itself, the two games between them have thrown a gauntlet that few others have been able to take up. But this year, a couple came close.

Gears Tactics, originally announced at E3 2018, was a turn-based tactical spin-off which absolutely nobody saw coming, and was better than I think we all thought it might be. To be sure, Gears of War represented a kind of ‘tactical’ approach to the third-person shooter that could – if you stopped to think about it – translate quite well to the XCOM space, but that doesn’t mean any of us expected it to happen.

After some silent running until quite late into 2019, Gears Tactics released in April 2020 and it was… good? It lacks a strategy layer and Editor Rich reckons its repetitive missions can’t sustain a lengthy, humdrum story, but its innovations to tactical combat are some of the best in the genre since XCOM. You can read PCGamesN’s Gears Tactics review for more. We’d love to see its continued as the core combat is really strong. 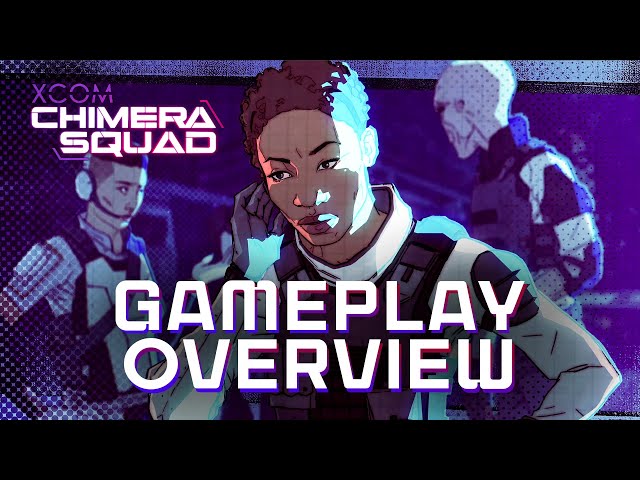 XCOM: Chimera Squad is a very different story. Depending on who you ask, it’s either a welcome breath of fresh, XCOM-like air, or the biggest betrayal since some Trojans received a lovely wooden horse as a peace offering. The truth is probably somewhere in the middle – XCOM: Chimera Squad is not a bad game, in any sense of the word… it’s just not the game XCOM fans wanted, apparently.

To be honest, I don’t have much sympathy – we all know (read: pray) XCOM 3 is coming, why get mad about a decent(ish) spin-off game? 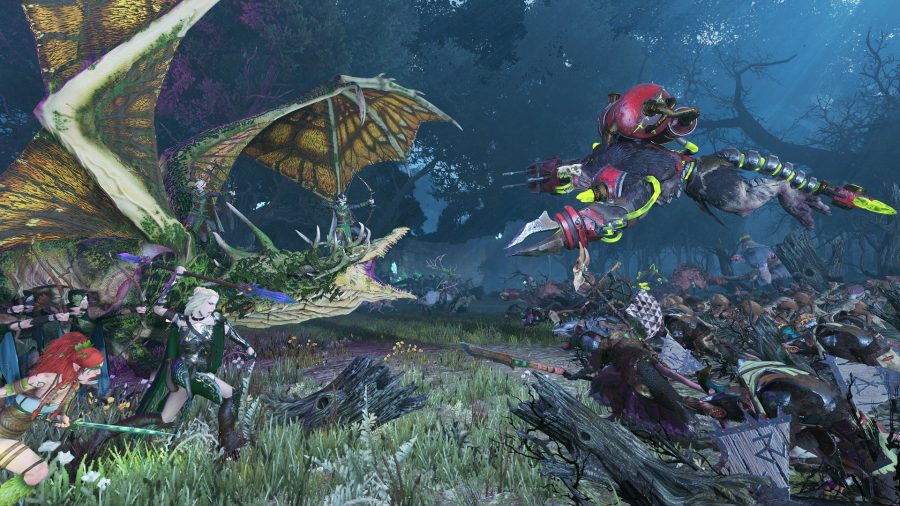 Romance of the Total Wars

SteamDB is one of the current 'go-to' sources for data on player numbers. It's not perfect, but the picture it paints when it comes to looking these things up is pretty accurate.

Other metrics and methods of slicing the data are also very close. This says more about the resilience of Total War's second roman outing than it does about the popularity of Three Kingdoms itself, as the latter is the better designed game by a fair margin.

Speaking of waiting patiently, Total Warhammer 3 has yet to make an appearance, despite it most definitely being A Thing(™). Creative Assembly has been rather coy about it all year, blaming COVID-related delays to the lack of any kind of definitive announcement. In the meantime, the studio has been trucking on with additional expansions for Total War: Warhammer II and Total War: Three Kingdoms.

It’s not unreasonable to suppose that, had the world not been plunged into a pandemic, we’d have had a concrete announcement about Total War: Warhammer 3 by now. I don’t think the existence and eventual release of Warhammer 3 is in question here, it’s just been delayed. I’m sure Creative Assembly would be able to manage communications effectively enough to account for the delay, but then again, we can’t begrudge the studio for its caution after watching the Cyberpunk 2077 cavalcade roll past, wheels buckling – yeah, it’s probably for the best.

As an interesting aside, Total War: Rome II was for years the most popular historical Total War game, despite releasing seven years ago. This changed when Total War: Three Kingdoms released last year, but at the time of writing, both Three Kingdoms and the much older Rome 2 are now comparable in terms of daily player numbers. Roma Surrectum! 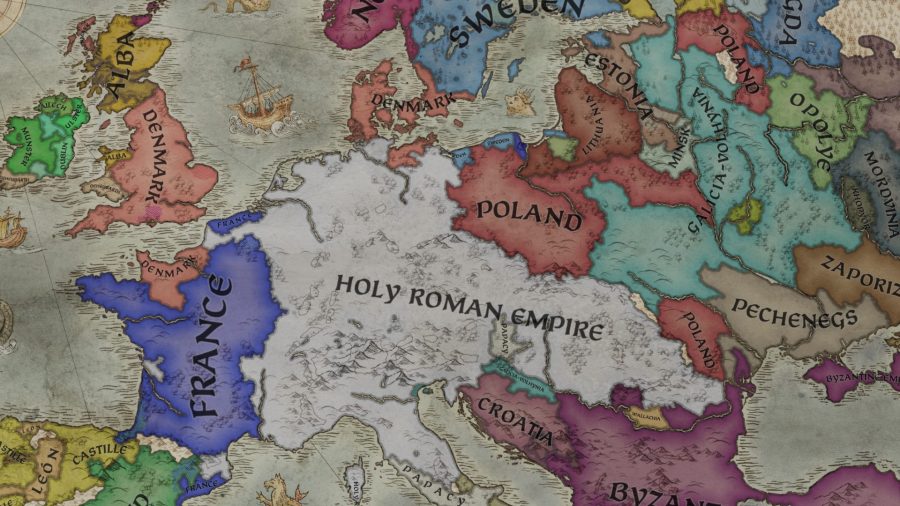 Game of the Year: Crusader Kings 3

The undisputed highlight of the year, according to us (me), was Paradox’s Crusader Kings III. The culmination of nearly a decade’s worth of iteration and self-discovery in the strategy space, the third Crusader Kings game was both a critical and a commercial success.

Commercially, it sold a million copies in just over a month, which is a great milestone for any game but especially gratifying when it comes to something as relatively niche as grand strategy. Crusader Kings 2 brought the franchise and the sub-genre into modern times, and pioneered a new model of post-release support that saw eight years of DLC before Paradox saw fit to release a sequel.

Not only did Crusader Kings 3 raise its game in terms of graphics and accessibility, it also offered a very complete, very immersive strategy/sim experience set during the medieval period. There are plenty of gaps waiting to be filled, for sure, but other than perhaps Imperator: Rome, it is the most stable and polished grand strategy release to date.

More like this: the best grand strategy games on PC

There have been a lot of really interesting and really good strategy game releases in 2020, but I don’t think any true fan of the genre would argue with awarding CK3 strategy game of the year. Speaking of game awards… 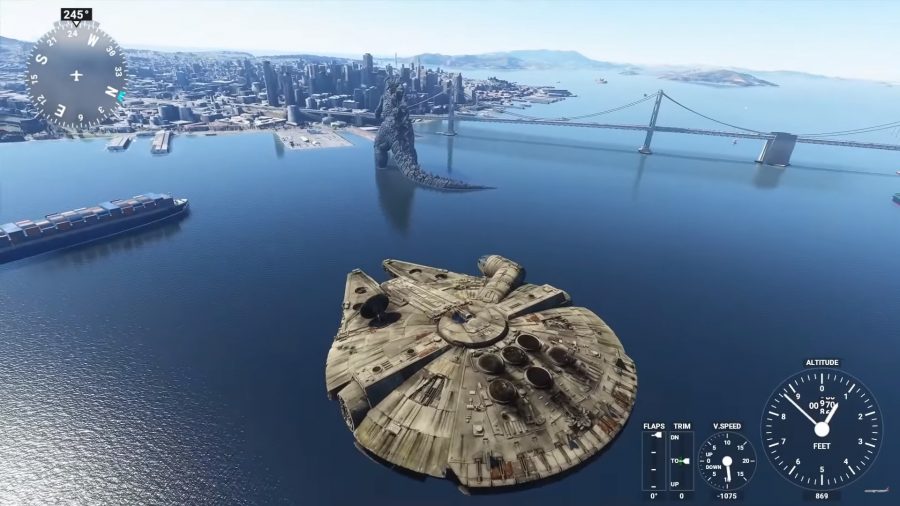 The Game Awards are cancelled

Once upon a time, in the most distant past of 2009, The Sims 3 won an award from Gamespot for being the ‘Best Strategy Game’ of the year. (I know, you don’t have to look at me like that…). Major multiplatform outlets and mainstream awards in general have often struggled to give strategy gaming its fair share of attention – sometimes they ignore the genre completely, or blend it with others in a way that amounts to the same thing.

This year’s The Game Awards, hosted by Geoff Keighly, had the rather progressive idea of having a ‘strategy and simulation’ category, which at the time I felt was excellent. Less so when I learned that Microsoft Flight Simulator won the award.

Ok, sure. It’s a simulation game (a very, very good one according to our Microsoft Flight Simulator review), and it won the ‘strategy and simulation’ award, but also nominated in this category were Crusader Kings III, Gears Tactics, Desperados III and XCOM: Chimera Squad. As much as MFT is a technical marvel, it’s also a fundamentally different game to all these others – to strategy (or, heck, flight sim) fans, this was every bit as nonsensical as nominating Doom Eternal alongside Stardew Valley – and it’s massively unfair to stack it against them. 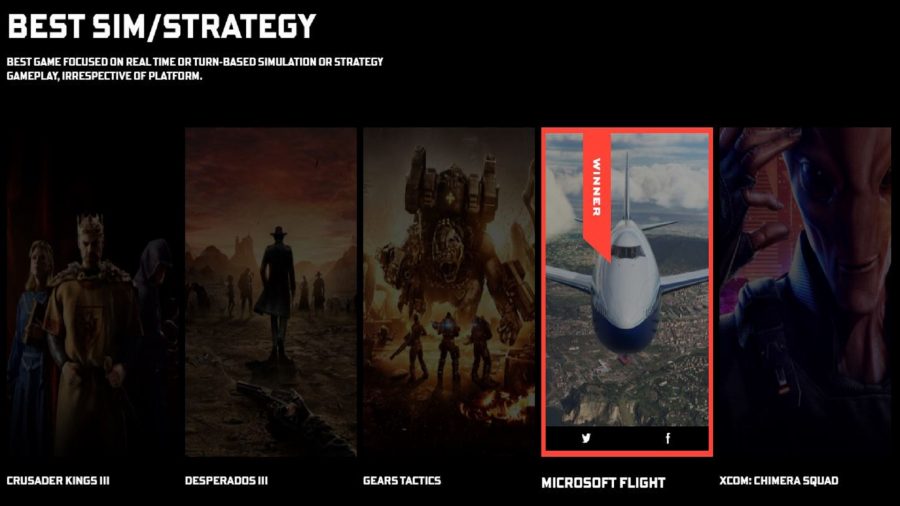 It’s especially unfortunate in a year that’s been so strong for true strategy releases, all of which deserve recognition. Look, I’m not bitter, I’m a just bit… ok? I just need some time.

Now I have weaponised snowmen. Ho-ho-ho

… since none of you seemed to care much when I wrote about it the first time around, Age of Empires II added in weaponised snowmen as part of their holiday 2020 festivities. WEAPONISED SNOWMEN.

It’s a small thing in the context of the whole year, but you’ll kick yourself if you miss the chance to go to war with snowmen in a classic RTS.

If you thought 2020 was a good year for strategy games, wait until you see what 2021 has in store. An rough list I found down the back of my toilet mentions that we’ve got everything from Humankind, to Kings Bounty II and Blood Bowl III due to release sometime next year. And that’s just what we know about; as mentioned Warhammer 3 is probably going to make an appearance, but what else? XCOM3? Something new? I can’t wait to find out. Happy holidays, strategy fans!