Nothing stays dead forever, especially when you take incredibly mild sexual imagery away from young men with the ability to move a camera down a few inches. As we reported a few months back, some people were very annoyed that Capcom changed the angle of R. Mika’s super-startup to feature a bit less butt-slapping. This was back before they had real things to worry about like servers dropping them from limited single-player content, but that doesn’t mean The Grudge was forgotten – and so the slap has returned, thanks to one modder.

If you’re desperate for digital loving, we’re not beyond helping you with the best sex games on PC.

A poster by the name of CENAWINSLOL (he often does, my friend, he often does) on Reddit created the mod. It involves a bit of file tinkering and he has no idea if Capcom will ban for using it when their servers are up and running properly. What he’s actually done is replace the animation file for the camera in the release version with the one that was in the beta, that still had the much-lauded motion in shot. He’s also ‘fixed’ Cammy’s intro, which had an equally small tweak aimed at having a little less ass in shot at a key moment.

The post was made to r/Kappa, which I’ll warn you before I link it is, in equal parts, one of the funniest and worst places on the internet as well as being very NSFW. It is a drainage port for the fighting game community, but they’re usually quite quick to the latest dramas if that’s your thing. Naturally, they also fairly regularly have days dedicated to posting various sorts of pornography. The mod isright at home.

Also in that post are the various instructions for installing it. It’s all manual and, as CENAWINSLOL so wisely advises, do back everything up before you do anything. If you’re looking to make your own fixes or skins, there’s a bunch of resources to get started modding SFV on this forum, originally for SFxT. Some of the stuff being made there isn’t even focused on exposing as much of the women characters as possible, amazingly. 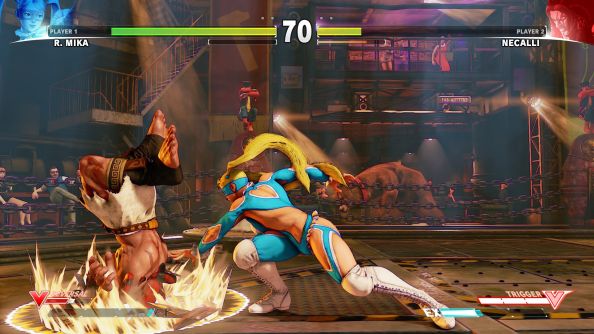 Original Story 9 Nov 2015:In Street Fighter 5, the character Mikaslaps her bottomjust before she’s about to pull off a grab. A new version of the animation raises the camera just atiny bit, so you can’t quite see the moment where Mika’s hand makes contact with her digital bum.

Obviously, this has incensed some people.

A petition has appeared on Change.org, demanding that Capcom reverse the change. And the change has, of course, been labeled ‘censorship’, because why not?

“We do not want to accept any censorship of this kind, and we do not wish to purchase censored games,” reads the petition.

“This content must remain uncensored, retained in its original form when the game is released, as should all the current content in the beta builds thus far that your company may wish to censor for whatever reason.”

Note that Mika still slaps her arse, still wears revealing clothes, continues to sport a back-breaking bosom, and that the only thing that’s changed is the height of the camera at the moment when the bottom-slapping occurs.

1,020 people, so far, think that this is censorship, and are pretending that they won’t buy the game because of it. 1,020 real humans. What a time to be alive.