The Street Fighter 5 beta hasn’t been officially available since the end of October, though has randomly popped up in the intervening period without warning, sometimes with extra characters. However, the next full phase is yet to be announced – but a new advertisement on the Playstation Network points towards the 17th of December as a live date, running until the 20th.

The majority of the Street Fighter 5 cast has been revealed already.

Shoryuken’s got the scoop via an extra-keen NeoGAF poster, with this advert spotted on PSN: 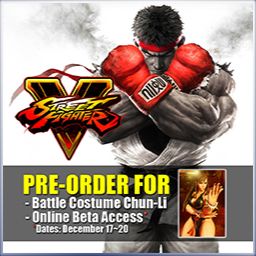 Whether this beta will be making it to our glorious motherboards is yet to be confirmed. Theoretically, there’s no reason not to, as the extra testing of PC hardware, cross-platform support and other PC-specific features would be important. However, with the amount of datamining and ‘spoiled’ surprises that came out of the last PC beta, Capcom might want to avoid letting us have access to any more of it. There was a recent update to both systems, however, so it’s still possible.

Chances are this will be getting its official announcement, as well as any details regarding which characters, stages and modes will be available, during the Playstation Experience this weekend. The keynote is on Saturday at 6pm GMT / 10am PST / 1pm EST / 7pm CET and will be broadcast on Twitch and all the rest. It’s possible SF5’s big announcements will come during Capcom Cup instead, which is on the Sunday. We’ll have more on that later in the week.