With release around the corner and every character revealed, the last thing we were left wondering about Street Fighter V was how the single-player component would shape up. Now we know the answer is in two distinct parts. The game will launch with a set of character stories, one for each fighter, introducing their background through a series of fights joined together by some illustrations. However, the actual story of the game will play out in free DLC released in June, set between Street Fighter IV and Street Fighter III and told using proper cinematics for the first time in franchise history.

I’ve been looking through the upcoming PC games for 2016 and good lord we’re going to have a hell of a time.

It’s an evolution the series definitely needed, fighting game single-player content having greatly improved since the Street Fighter 2 some-fights-and-a-bit-of-dialogue that has been the norm for Capcom ever since. Much of this comes out of Netherrealm Studios who managed to wrap Mortal Kombat and Injustice in silly but interesting stories and mini-games while keeping them mostly about kicking other people in the face. Street Fighter is taking those cues, but will need a little extra time to get it right, so we’ll have the old way on launch.

Come June, here’s what we’ll have to look forward to:

Yep, that certainly looks like a videogame. Floating guy. Hero looking sad at a photo. Giant space death ball. All the hallmarks.

Other than the time setting and it coming totally for free, there isn’t a lot of info out there about what it will feature. Classic Street Fighter villains Shadaloo clearly play their usual part, and Capcom say there’s a few other hints dropped in there too, but more will be revealed in the near future. Meanwhile, what we’ll get on launch will look a little more like this: 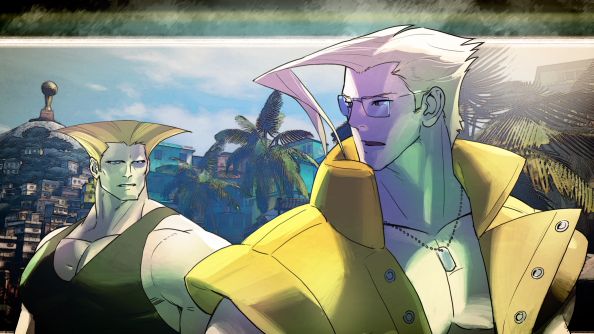 A little less impressive, probably a lot cheaper. Here’s what Capcom have to say about how these character stories work:

“Each character has their own storyline that provides background information on what drives them to fight, and what their relationships are to the other characters.What answers does Ryu seek in his never-ending journey? What happened to Charlie Nash after his apparent demise in Street Fighter Alpha? Who is Necalli and what does he want? Play the Character Stories to find out all these answers and more!”

So get introduced to each character when it launches, then a few months down the line see how they all interact in the main story. In the mean time, you’ll be able to earn Fight Money, the in-game currency, from these character stories, which will be usable to purchase the first additional content when it comes online in March. Street Fighter V won’t be launching with anything that can be bought with these currencies, so that will be the first opportunity, and they say that a playthrough should grab you roughly enough for that first extra character.

Finally, Capcom announced the final SF5 beta on their official blog today. It will run for just the final weekend of this month starting January 30 at 00:01 PT / 08:01 GMT, and ending January 31 at 19:00 PT / February 1 at 03:00 GMT. There’s no details on who will be included but chances are it’ll run the full roster with everything we’ve had access to before, presumably on a patch that resembles the final version of the game. That arrives just a couple of weeks before the game’s final release on February 16th.