Capcom have fully detailed their plans for post-launch support of Street Fighter V, and it’s a hefty set. Along with the already announced ‘cinematic story expansion’ and six DLC characters,  a host of new modes to help players improve will be added to the game as early as March. Past that, they’ve committed to releasing a character from their DLC roster every month through September, starting with Alex at the same time as the new modes.

Street Fighter V just never wants to leave our upcoming PC games list, so will always have something round the corner. That’s our theory.

Here’s the full schedule, as announced on the Capcom Unity blog: 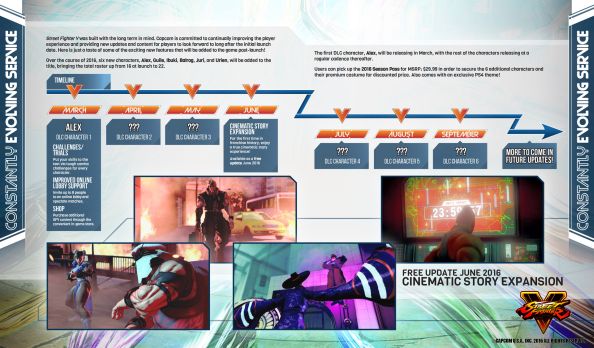 Capcom are yet to commit to a release order for the final five DLC characters Guile, Ibuki, Balrog, Juri and Urien. However, as we speculated previously, with Guile showing up in the trailer for the story expansion, it would make sense for him to arrive in April or May. With Shadaloo’s centrality to that plot, Balrog and Juri would also seem like logical releases for the May slot. Given that plot also bridges the gap between SF4 and SF3 – the current end point of the Street Fighter storyline – Ibuki and Urien being originally from that game would make sense as year-enders.

With release so close, Capcom also showed off the costumes that will be unlocked through story-mode. You can have a look at them all on Facebook, and hope Some Clothes DLC is on the way for poor, likely very cold, Laura. These won’t be unlocked by playing the stories, but are featured in them as origin costumes for the characters, and once you’ve completed a character’s story you will unlock the ability to purchase the costume from the store once it launches in March. Seems a bit stingy, really, but there you go. 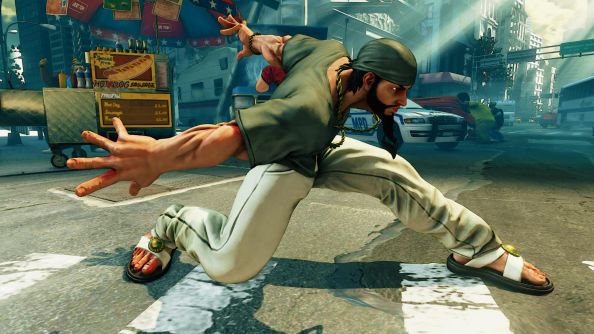 Along with that store launch will come trial and challenge modes, designed to help noobies and pros alike improve and show their skills. They’ll also be improving Lobby support in this update, letting eight people rotate in and out of one-on-ones while the other six spectate. This is also when Alex will release, and Capcom say if you’ve completed all the story content that comes with the initial release, you’ll have enough of the in-game Fight Money to purchase him. Alternatively, you can grab the season pass.

All told, this is a very odd release model, but one that should work very well for them. SF5 needed to come out early this year to match-up with the competitive-scene plans and schedule, but clearly various features weren’t complete yet. Rather than delay, they’re releasing a version of the game that does everything people will want it to – introduce characters, have 1v1 play and ranked modes – then patching everything else in for free over the course of this year. It will keep people interested in the game, and having an actual schedule for episodic-like DLC releases is something we’ve been asking for from regularly-updated games for years.

Assuming the version of the game that shows up next week on the 16th doesn’t feel like it’s half-done, it’s a solid decision. We’ll see how the community reacts over the coming weeks and months.