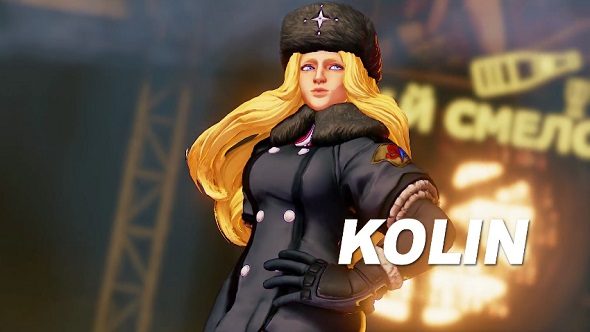 It’s been quite a long time since the announcement of Street Fighter V Season 2 but we’ve finally got news on the first brand new fighter. A constant presence in Street Fighter V’s Story Mode and loyal attendant of Illuminati president Gill, the phantasm of snow and ice Kolin will be the first new Season 2 character to join the Street Fighter V roster.

If multiplayer’s your thing, gander at these other great PC multiplayer games.

Adept in the Russian martial art of Systema, Kolin excels at reversing an opponent’s forward momentum and then striking with her own series of knife hand strikes. Bestowed with the power of ice by Gill, Kolin can freeze her opponents with sharp icicles and deadly frigid blasts to further slow their advances.

Kolin’s V-Skill is Inside Slash, which allows her to automatically reflect and punish an opponent’s incoming attack. It almost acts as a mix of Akuma and Ryu’s V-Skill, by having a parry which then does damage upon a successful activation. Kolin’s V-Trigger is Diamond Dust, where she shoots out a string of sharp icicles which jut out from the floor. While also applying damage and stun, this move also applies a ‘frozen’ debuff to the opponent, which will freeze them in place if Kolin manages to stun them in this state.

Her Critical Art is Frost Tower which, if she connects with the initial slash, summons a massive ice tower to impale her opponent. Like other DLC fighters, Kolin will also receive a Story, Premium and Nostalgia costume upon her launch on February 28.

Kolin is purchasable with Street Fighter V’s in-game Fight Money but you can also get her via the Street Fighter V Season 2 Pass. This pass gives you access to Akuma, Kolin and all future Season 2 characters for $29.99/£24.99, along with their Premium costumes and character colours 3-10.

Capcom have also announced that there will be a balance update to rework certain characters to make them fit the design ethos of Season 2. Expect further news on this balance update in March.