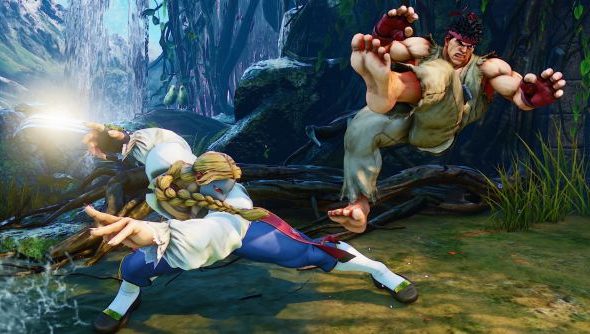 Kicking off what I expect will be a week of surprising announcements, Capcom have fired first in the Great Gamescom 2015 War with the announcement of a new character for Street Fighter V. It’s series mainstay Vega, returning from Street Fighter 4… and 2… and Alpha 3… though he did skip Third Strike. He replaces the brand-new Necalli as the most recently announced character, who was shown off along with announcements that the game would be a platform with earnable content at EVO this year. Trailer, deets, screenshots and speculation below.

He’s quite the violent young man. Capcom community manager Peter ‘ComboFiend’ Rosas has broken down part of his moveset in a post on Capcom Unity. In previous games, a certain amount of damage taken or blocked would cause Vega to drop his claw and mask, reducing his range and armour respectively. This time around, switching between claw and clawless is a choice that grants different movesets and can be done mid-battle. You still lose the claw if you take too much damage, so knowing how to fight with both is vital.

He also has access to a dodge-counter as his anti-fireball V-Skill, something every character has a variant of. His V-Trigger semi-super move is a projectile flower (of course it is) that allows him to teleport behind the target if it hits, delivering heavy damage.

There’s a bunch of screenshots over on the Street Fighter Facebook page, including this rather marvellous hug pose. Vega’s playable at Gamescom and somewhat shakes up the rumours of which characters would be announced next. Dhalsim and Zangief were the smart picks for the two remaining slots of characters that featured in Street Fighter 4. Hopefully it doesn’t mean rumours of god-man Urien prove false.

We’ve rounded up all the characters announced so far in ourStreet Fighter 5 character list.