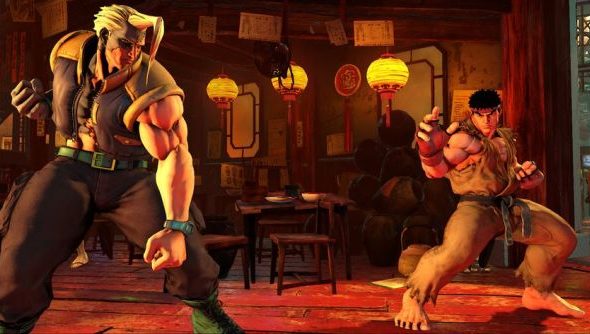 Update: The revealed character is brand new and very hairy – all but destined to have a finisher named ‘dread-lock’. See Necalli’s debut trailer below.

At a panel at Evo 2015, Capcom have confirmed a number of details about Street Fighter V. They’re considering the game as a platform, where all updates will be delivered digitally, rather than the four boxed releases for Street Fighter IV. New characters, skins and so on will be earnable through in-game currencies, one of which can be bought for real money and the other can be earned. Details are light but it’s essentially a F2P system for future content on top of the boxed release, rather than buying expansions. See the full stream and more tonnes more info below.

It was also confirmed that the game would feature 16 fighters on first launch, 8 of which were returning from Street Fighter IV and 4 of which were from previous games in the series but weren’t in SF4. The remaining 4 are all-new. This frame shows which characters fit in which category:

Rumours abound over who the remaining five returners will be, though smart money for the SF4 slots seems to be on Zangief, Dhalsim and Juri. The other two have far more unconfirmed reports, including wrestler Rainbow Mika, high-class snob Karin, Third Strike heavy hitting grappler Alex and my personal hope, combo-master Urien. I mean, come on, who doesn’t want this in Street Fighter V?!

Capcom also went into quite some detail as to the design philosophy behind the game and changed from Street Fighter IV. They were very careful to not say they were straight up making the game easier, but do want it to be more accessible and less about mastering engine quirks, more about reading your opponent and knowing the correct plays. Less combos that require one-frame timing and more unique options per character, rather than a catch all system like focus attacks.

The full panel is filled with interesting tidbits on design and SF5, so take a look:

Update:A new invention rather than a revival, Necalli looks like he’ll inspire dread like those he wears on his head. He’s seen lifting his opponents into the air by their skulls, before bringing them down at speed to meet the ground. That’s not even his best trick: a sequence in which he drags an fighter’s head through the dust, slams them against a wall, and scrabbles at their chest like a caffeinated Wolverine. And the hair? The hair has its own stuff going on: