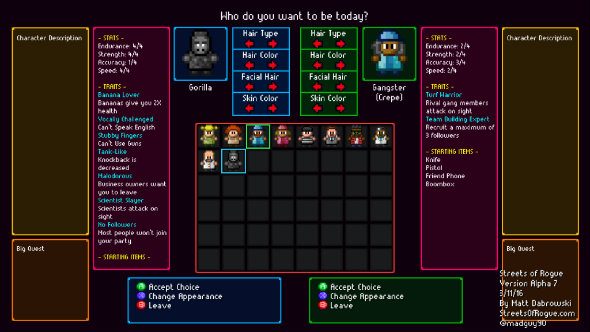 Streets of Rogue is more than just a clever, attention-grabbing game title. I just played it for ten minutes to check it out and I’m looking forward to diving back in.

There’s more small studio goodness in our list of the best indie games.

I could have been a gorilla, a cop, a soldier, a nurse, a vampire, a gang member or various other characters, but I chose to be a naked shapeshifter who cops shoot on sight. Luckily, I soon shifted into a gang member’s body as he was taking a leak.

With my new body, it only felt right to attack the local gang hideout. The Crepes – yes, that’s a spin on the Crips, and there’s also one for the Bloods – took me out within minutes, but I managed to exit my new body, which was now in chunks on the floor – next to bits of wall that chipped off in the firefight – and escape into the streets, naked.

The second attack, this time after stealing the body of a homeless person, went worse.

Streets of Rogue is a curiosity. It’s a top-down, immersive sim-style roguelite. It’s a little janky, as it’s still in development, but it already feels great to play.